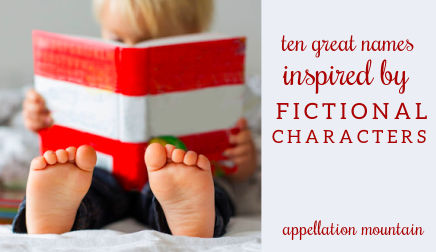 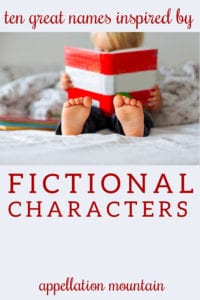 Please welcome Lorie Anderson of MomInformed.com as a guest blogger. Check out the site’s baby names section – plus tons of other resources for parents!

We are often inspired by the books we read or a great movie that really pulls at our heartstrings. Many of these great books and movies hold a special place in our hearts, they often have beautiful childhood memories embedded in them or a character that you feel you can really connect with. Some characters we instantly connect with and some are personal heroes. So it is no wonder that many of these great literary and movie characters inspire our baby name choices later in life.

Here are some of our favorite fictional characters that inspired some of the most popular baby names.

E.B White’s classic Charlotte’s Web, is about a little girl Fern Arable who saves a piglet called Wilbur from being slaughtered. Fern is a kind gentle little girl who although has grown up on a farm all her life she is not ok with the harsh realities of raising animals. She is a daydreamer and of course this gentle and caring nature is something that many parents wish for their new baby

Fern was very popular from the turn of the last century through the 1940s and it reached a high of number 152 in 1916.

Charlie – Charlie and the Chocolate Factory

The name Charlie is a name that appears numerous times throughout literature and the silver screen. But one of the most famous is Charlie Bucket, a kind hearted boy from a poor and desolate family, who along with four other children wins a tour of the secretive chocolate factory run by a strange man called Willy Wonka.

Charlie means freeman and is derived from the name Charles. The name has always been a well liked name and although its popularity declined during the 60s it has always remained in the top 2000 baby names.

Most people will associate the beautiful Halle Berry as the character Storm from the X-Men movies. But the character began in the American comic books published by Marvel Comics. Storm is one of the most powerful mutants, she is wise and a great leader. All these are great attributes that parents desire for their children.

Storm has been in the top 2000 baby names since the early 90s but has never broken through into the mainstream in the US. However, it is in the top 50 names in Denmark.

Although Katniss is not a real name it has managed to hit the rankings since 2011, around three years after The Hunger Games novels were released. Don’t get me wrong it was not a hugely popular name and in fact only ranked at number 15,669 prior to the release of The Hunger Games. However, once the film series was released with actress Jennifer Lawrence taking on the role of Katniss the names popularity skyrocketed to number 2,917 in 2015.

It is true that Harry has always been a popular name more so in the UK where it has continually ranked in the top 10  favorite baby names. It’s popularity may be to do with the main character of the Harry Potter series that first hit shelves in 1997. In the series Harry is portrayed as a smart, lovable, character is infamous for surviving an attack  by Lord Voldemort when he was a baby.

A beautiful name with Sanskrit origins that means noble. The name shot to popularity jumping from number 942 in 2010 to 119 by 2015. It is no surprise that parents are loving this name, after the feisty young princess who overcame huge personal struggles to find her way back home in the Game of Thrones series.

The name has been in the top 100 names since 2009 but reached its top place of number 48 the year that Twilight Saga: Eclipse hit the big screen. The film was the highest domestic-grossing movie in the Twilight Series.

Bella is a diminutive of Isabella and is of Italian origin. The name means beautiful.

Gray is a diminutive of Grayson, which means the son of the bailiff. It has English origins and is probably better known as a surname rather than a first name. This is not a super popular name and has yet to make it into the top 1000 names in this century. But the longer forms of Grayson and Greyson are already in the top 100 names. So it could be a cute short form of one of the longer names.

Gray is the courageous, intelligent, sensitive, and dinosaur obsessed young boy from Jurassic World. He is played by actor Ty Simpkins.

For any parents that are huge Game of Thrones fans then this is another name that has become increasingly popular since the series release. It broke into the top 1000 names in 2014 and 2015 thanks to the series increasing cult following and popularity. Khaleesi is the wife of a ruler among the series Dothraki warriors.

Although many people were not overly pleased with the series ending that sees Khaleesi’s character take a less than favorable twist.

No list would be complete without the charismatic Disney character from the hit movie Frozen. Elsa jumped from number 527 in 2013 to number 286 in 2014 after the release of the movie. All parents want their daughters to share the strength of character and determination that Elsa shows in the movie.

We forget how much our lives can be affected by what we read and watch, yet it is made more and more apparent in our everyday lives. Especially when it comes to light in such important decisions as what we choose to name our children.

Some of the names chosen by parents that are inspired by the movies and literature would certainly not be my first choice but then some are both super cool and cute – so why not!

Thanks to Lorie for sharing some of her favorites! Find more of her lists at Mom Informed’s baby names page.