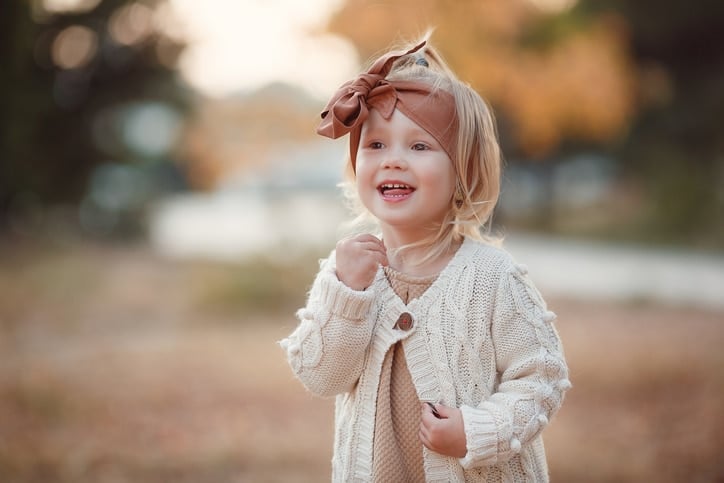 Choosing an unusual or unique name for your baby has become a lot more common. Having a less common moniker will distinguish her from her peers with more classic or popular names and set her apart for the rest of her life in a good way, of course! Whether you’re daring enough to go for a name chosen by the likes of celebrities or you opt for something slightly less out there, there are endless possibilities when it comes to selecting a name that is both original and full of character. We’ve gathered a list of 20 unique and unusual girl names to add to your favorites list.

Amery
When we hear the name Amery, you might think of this for a little boy. But it’s a wonderful unisex name that can be used for any gender. It means “work rule” and is of English origin. Runners up: Aeris, Amryn, and Anya.
Bryony
Bryony isn’t on any top baby name list that we’ve ever seen. Chances are it won’t ever become that popular, but don’t write it off. The name, which means “to sprout,” is a fitting choice for a little girl that we would love to hear used more often. Runners up: Bronte, Brixley, and Brodie.
Callen
This refreshing alternative to names like Camren and Caden is an Irish name meaning “slender.” Callen is hip and unique while still not being too out there. Runners up: Clea, Clove, and Cambri.

Corin
Corin has a cute ring to it; however, don’t let its sweet sound fool you; the name means “spear,” and if that’s not a mighty baby girl name, we’re not sure what is. Runners up: Caitriona, Corinne, and Celestine.
Dallyn
This English title is a twist on the fashionable unisex name Dylan. We love the familiar ring it has while at the same time, having a fresh twist. It means “from the valley” and will fit a little bohemian girl. Runners up: Desta, Dalby, and Davina.
Elowen
This name has an enchanted ring to it and comes from the Cornish word “elm.” Runners up: Eira, Eilish, and Essa.
Ensley
This name brings to mind the misty hills and magic of the Scottish countryside. Its posh and boho elements make it a perfectly unique name for your little princess. A variant of Ainsley, Ensley is a Scottish name meaning “solitary clearing”. Runners up: Elsie, Eisley, and Evaliese.

Jovie
A bright and cheery name you’re sure to remember, this modern American name is a variant of the word “jovial” which, means “happy.” Runners up: Jaxine, Jessamy, and Jetta.
Karrigan
Coming from a Celtic surname, this name feels on-trend without looking like a copycat. This Anglicized form of the Gaelic O Ciaragain means “special warrior.” Perfect for a fiercely independent little girl. Runners up: Kelby, Kova, and Keaton.
Loxley
It’s an interesting name, and you’ll be hard-pressed to find another little girl named Loxley. It means “glade by the lake” and is of English origin. Runners up: Lulie, Liara, and Lacen.
Mercer
If you don’t want your daughter’s name to be too ‘girly,’ unisex names, such as Mercer, could be a good choice. Mercer is derived from an Old French word meaning a “merchant.” Runners up: Midori, Miliani, and Maves.
Noely
This French name meaning “Christmas,” could be a variation of the more popular Noah or Noelle. With the name Noely, you get the feeling of the more recognized name without having to worry about giving your kid a name that everyone else has. Runners up: Nyla, Nilsa, and Nerida.
Oliviane
If you like popular names but want to reflect your baby girl’s uniqueness, why not combine two favorite names? Oliviane sounds like a fusion of the names Olivia and Viviane and means “olive tree” in Latin. Runners up: Orla, Olivette, and Ospery.
Presley
This cool name is inspired by the King himself; it loosely translates from Old English to “priest meadow.” Runners up: Peony, Peregrine, and Peta.
Priya
This ultra-feminine and seriously underused gem is a name of Sanskrit origin and means “beloved,” just like your little one will be. Runners up: Pia, Pippa, and Prairie.
Schuyler
If you don’t want a too-feminine name, Schulyer is a great choice. It has Dutch origins and means “scholar.” Perfect for your future valedictorian. Runners up: Sidra, Sydney, and Sakura.
Seona
If you’re searching for a title with Gaelic flair, then look no further. Seona is the Scottish Gaelic form of Jane, meaning “God is gracious.” Runners up: Selma, Shelby, and Sybil.
Thara
A name reminiscent of Sarah, Thara is distinctive enough of a title to make your daughter feel like she’s one of a kind. Thara has roots in Arabic, meaning “wealth” but also means “water” in Thai. Runners up: Tressa, Teya, and Tamsin.
Trysta
This elegant name is derived from Celtic origins and means “noise or sorrowful.” There’s something special about the name Trysta. It’s not common, so there will be no competing with other kids in the class when the name is called. Runners up: Tazia, Tulia, and Tania.
Zelle
This short yet sweet title is derived from the Hebrew name Zell meaning “wise and peaceful.” Runners up: Zandra, Zaya, and Zoraida.

What are your favorite unique and unusual girl names?
We’d love to hear your thoughts in the comments below.

Mittens & Bella – Ragdolls of the Week