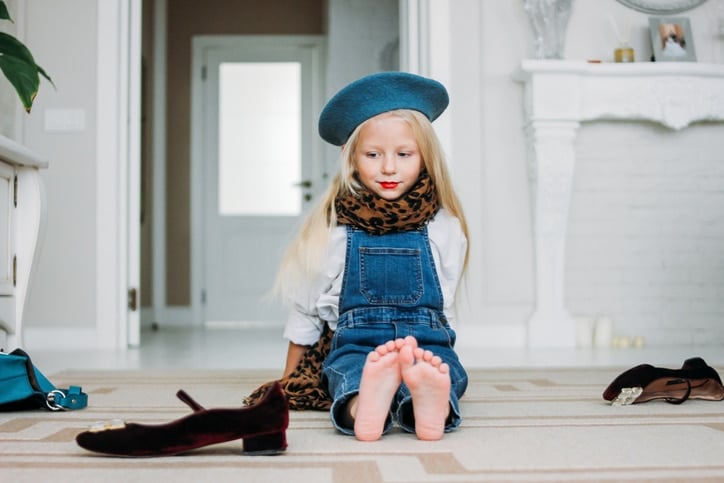 
Embed from Getty Images
If your anything like us, you’ve already binged watched the entire season of Netflix’s Emily in Paris and were left saying, oh la la. We couldn’t help but feel inspired by the beautiful Parisian backdrops and the stunning French street style for this name list. And it should also come as no surprise that the city is known for its je ne sais quoi also has the chicest-sounding baby names. Whether you loved Emily in Paris or are a Francophile like us, these French baby names are modern, uncommon, adorable, and rare; each of these names is sure to set your child apart. Without further ado, here are 50 of the most elegant French monikers that will leave parents-to-be saying enchanté!

French Names from the Show:

Embed from Getty Images
CAMILLE
French actress and model Camille Razat shares the same name as her Emily in Paris character, Camille. Pronounced Kah-MEE in French, Camille is derived from the Latin name Camillus meaning “young ceremonial attendant.” If you plan on having a girl, you may want to try Camille, which is undeniable, effortlessly French girl chic. In France, Camille is considered a gender-neutral name.

Embed from Getty Images
SLYVIE
Philippine Leroy-Beaulieu stars as Sylvie, Emily’s tough boss, who gives off some major Miranda Priestly vibes. Sylvie is a chic girl’s name coming directly from France. It originates from the Latin word for forest Silva, meaning “the spirit of the wood.” So if you are looking for more of an enchanting Parisian name with an earthy feel, Sylvie may be the right match for you.

Embed from Getty Images
GABRIEL
Lucas Bravo plays Gabriel, Emily’s hunky downstairs neighbor, who she bumps into her on a regular basis. Gabriel is often used in the French-speaking world but is originally a Hebrew name meaning “God is my strength.” We love the perfectly French posh air that this name carries.

JULIEN
Samuel Arnold plays Julien, Emily’s co-worker and frenemy.
Julian has a familiar ring with a French twist for your little boy. This jovial French variant of the name Julius means “youthful.”

LUC
Bruno Gouery plays Luc Emily’s funny and quirky co-worker.
Short, sweet, and to the point, Luc is a French form of Luke, meaning “light; illumination.” A perfect choice for the boy who will brighten up your life.

MATHIEU
Charles Martin plays an A-list bachelor and French fashion heir.
Mathieu is a French version of Matthew, meaning “gift of God.” We know the name as Matthew, but the French spelling is way chicer, no?

French Names for Girls Inspired by Emily in Paris:

AMÉLIE
While you’re familiar with Emily, we believe this French-sounding name is softer and more feminine. The name Amelie is a girl’s name of French and German origin, meaning “industrious.”

APOLLINE
This is a popular and chic baby name with Parisian moms right now. The name Apolline comes from the name of the Greek mythical sun god Apollo.

CAPUCINE
Who could help to fall in love with this pretty girls’ name? Despite its meaning of “cowled monk,” it’s a chic French name currently popular in Paris. In French, it’s pronounced as ka-puy-SEEN.

CÉLINE
With a name like Celine, meaning “heavenly,” your daughter will bring celestial energy to your world. It’s also a much-loved name in France and the moniker of the iconic fashion label.

CHLOÉ
Chloé is from the Greek name Khloe meaning “blooming or green and flourishing.” If you love fashion, why not name your little girl after one of France’s chicest fashion houses.

COLETTE
The name Colette is a girl’s name of French origin, meaning “people of victory.” It’s easy to pronounce and spell but still quintessentially French. It also lends well to the nickname Coco, as in Chanel.

DAPHNÉ
This très chic name is full of personality and style and comes from Greek origins, meaning “laurel tree.”

DELPHINE
The name Delphine has a perfect touch of whimsy and class. This absolutely adorable name is a form of the Latin Delphina, meaning “woman from Delphi or “dolphin.”

ESMÉ
Esmé is a captivating French name that’s nothing short of adorable and will go wonderfully with nearly any middle and last name. But really, it’s just super cute, and we think it translates well from childhood to adulthood. The name Esme is a girl’s name of French and Persian origin meaning “esteemed, beloved; emerald.”

ÉLOÏSE
Eloise is a girl’s name of French and English origin, meaning “healthy; wide.” If you love vintage monikers, this French name that embodies effortless elegance is one of the most stylish options around.

FRANÇOISE
The name Francoise is feminine of Francois, meaning ‘From France’ or ‘free one’ though your little doesn’t need to be from France to rock such a gorgeous chic name.

HÉLÈNE
The name Helene is a girl’s name of French origin meaning “bright, shining one.” It might sound a little old-school, but we think it’s very chic.

JEANNE
If you’re looking for a strong moniker, Jeanne is it. This moniker is Joan of Arc’s traditional French name, one of history’s most iconic heroines. The French variation of Jean has Hebrew origins and means “God is gracious.”

LÉA
A simple yet chic name, Léa has its roots in Hebrew and means “languid, weary,” and it’s been one of France’s top ten baby names. Famous French Léas include actresses Léa Seydoux.

LOUISE
In French, Louise means “famous warrior” It is a feminine variation of the name Louis that is as strong and cute as it is sophisticated and lovely.

MANON
Manon is a French form of Madeline meaning “bitter.” the beautiful French diminutive of Juliet means “youthful,” This is a classic French name that will be popular for years to come, and besides, it just has a cool ring to it, right?

MARGAUX
Pronounced Mar-go, the name Margaux means “pearl” and is of French origin. In English, the name is Margot, but we totally think the French spelling is way cooler.

SABINE
The name Sabine means “Sabine Woman” and is of French and German origin. It originated from the Sabines, an Italian tribe that lived in ancient Italy before the Romans came. Sabine is a chic name that will match any amazing little girl.

THAÏS
This Parisian name is soft and only one syllable, making it fun and easy to pronounce in multiple languages. The name Thais means “beloved, bandage” and is of Greek origin.

VIOLETTE
Who doesn’t love a floral vibe!? The name Violette is a girl’s name of French origin, meaning “purple.” This French version of Violet has a softer pronunciation that makes it all the more cute and exotic.

French Names for Boys Inspired by Emily in Paris

BASILE
Pronounced BA-ZEEL, in French, this gorgeous moniker is yet another name that is rarely used, but totally très chic. Basile is the French form of basil.

CORENTIN
Corentin is a distinguished and dapper name of French origin that means “tempest, hurricane.”

ÉMILE
Émile is the French variation of the Latin name Emil, which means “rival.” Its sophisticated sound is one that will give a tiny gentleman an air of classy coolness that won’t be able to be ignored.

ÉTIENNE
The name Etienne is the French version of Stephen means “crown or garland.” This name carries a level of sophistication and will make others envision a little king.

GABIN
If you like Gavin, consider the French version; this name is of French and Latin origin meaning “of Gabium.”

ILYAN
We already adore Elijah, but the French version is super chic. The name Ilyan is a French variation of the Hebrew name Elijah meaning “Yahweh is God.”

JACQUES
This classic and oh, so French name is the French variation of James and means “supplanter.”

LAURENT
A French boys’ name from the Roman surname Laurentius, meaning “from Laurentum.” Fashion-minded parents will think of Yves St. Laurent, which only makes it even more of a chic choice for a baby boy.

LÉON
We’re already fans of the Leo, but the French version is also cute. In French, Leon means “lion.” This name is on-trend all over Europe and is becoming more popular in the States.

LUCIEN
For more of a metropolitan air bound to turn heads, consider Lucien, which means “light or illumination” in French.

MAXIME
Maxime means “greatest,” which is just what your little one will be when they enter the world. And it’s an excellent alternative to the more common Maximus or Mason.

NOÉ
If you love Noah, then you’ll love this French version, which has serious cool factor and means “rest.”

RÉMY
This long-time favorite among parents in France is a unisex name with a modern feel. It comes from Latin origins and means “oarsman.”

RENOIR
A very cool French baby name for boys meaning “counsel rule.” He’ll absolutely be the only one on the playground with this unique name.

ROMANE
Romane is an undeniably lovely name of French origin, meaning “a Roman.”

SÉBASTIEN
Sébastien is a timeless name of French and Greek origin that means “man from Sebastia.” We guarantee this classic name will be cute now and in years to come.

THIÈRRY
This French name is just as bold in meaning as it is in sound. Thierry is a boy’s name of French origin, meaning “ruler of the people.” It’s the perfect name for a future leader.

YVES
Yves is an undeniably swoon-worthy name of French origin, meaning “yew.” It’s a one-syllable stunner that will fit beautifully with nearly any middle and last name.

What are your favorite chic French names?
We’d love to hear your thoughts in the comments below.