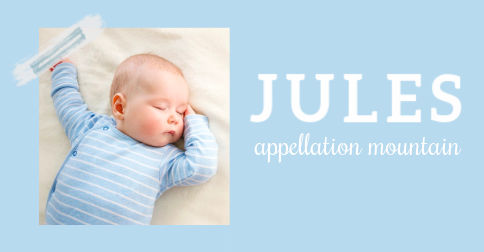 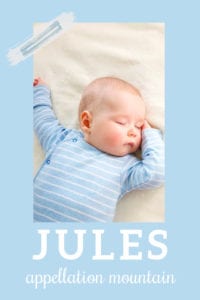 The baby name Jules traveled from ancient Rome to the depths of the ocean.

Thanks to Maia for suggesting her son’s name as our Baby Name of the Day.

Gaius Julius Caesar might be the most famous bearer of the name, but he wasn’t the first. His family was among the most ancient of the ruling Roman clans.

They claimed to trace their lineage back to Aeneas, legendary prince of Troy, via his son, Julus. They appear in the written record as far back as the seventh century BC, so yeah … this name? It’s been around.

Born around 100 BC, Caesar became a general and statesman. After leading several successful military battles, he provoked civil war by crossing the Rubicon and returning to Rome with his army. Before long, Caesar was in charge of the government, too. As “dictator for life,” he instituted reforms – and drew the ire of powerful enemies.

Caesar was assassinated on the Ides of March, but his successor, Octavian, would go on to establish the Roman Empire.

A saint, multiple popes, and a smattering of German nobles answered to Julius. No surprise, then, that the name spread, changing as it traveled across language and time.

The Spanish version, Julio, is broadly known. It’s one of four Jul- names in the current US Top 1000:

The baby name Jules fails to make the list. It’s simply the French form of the name. Up until 1961, it appeared in nearly every US Top 1000 list.

Jules Verne was a writer, credited with pioneering the science fiction genre.

Born in 1828 in Nantes, France, he’s widely remembered for the fantastic journeys he crafted. Journey to the Center of the Earth, Around the World in Eighty Days, and Twenty Thousand Leagues Under the Sea remain much-read and adapted well over a century later.

While it’s no surprise that other authors credit Verne as an inspiration, it’s noteworthy that scientists often credit Verne’s book as sparking their imaginations.

In the US, the baby name Jules remained an uncommon, but familiar, name from 1880 through the 1950s. But after 1961, it exited the ratings entirely.

Part of the challenge? Most of the famous bearers remain French – or from French-speaking countries, like the artist Breton, composer Massenet, explorer d’Urville, or fictional police detective Maigret.

Or maybe it was just sound. Jul- names for boys, like Julius and Julian, were all falling in use during the mid-century.

Instead, Julia rose for girls, along with Julianne, Juliana, and eventually, Juliet and Juliette.

As nicknames go, the baby name Jules feels equal opportunity. It could be short for Julian.

And it frequently is.

Still, most people will recognize the baby name Jules as masculine, just like Alex and Charlie work across gender lines.

Boy names ending in s are enjoying a moment. Classic James is riding high, but so are surname picks, like Hayes and Wells.

Jules feels like it falls right in between the two groups, not the most traditional of choices, but certainly not a newly discovered surname option, either.

If parents in the 2020s think of a famous Jules, it might be Verne, or another Frenchman.

But it might also be Samuel L. Jackson’s character in 1994 blockbuster Pulp Fiction. Jackson earned an Oscar nomination for his portrayal of hitman Jules Winnfield.

It lends the baby name Jules some edge.

One more intriguing association: the scientific term joule, measuring a unit of energy. It was named for nineteenth century physicist James Prescott Joule. While the surname is tricky to pin down, it may come from Judicael, the name of a seventh century Breton king.

Jules sounds fleet and modern, a brief name that fits with rising favorites like Wells and Hayes. But that hides the name’s deep roots in the ancient world and throughout history, as well as its considerable literary pedigree.

If you like your names rare but familiar, stylish but not too common, then the baby name Jules might prove a satisfying choice.

Would you consider the baby name Jules for a son?

First published on December 16, 2011, this post was revised significantly and re-published on January 16, 2021. 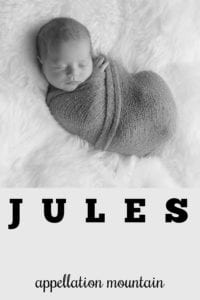