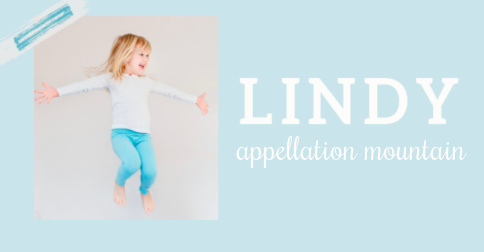 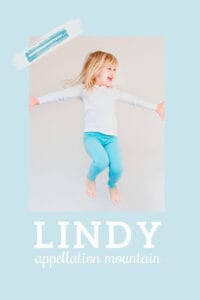 The baby name Lindy might be a nickname – or a modern choice that works for a daughter or a son.

Thanks to Jeanne for suggesting our Baby Name of the Day.

You might think of Lind as a surname. There’s nineteenth century opera singer Jenny Lind. And then there’s Linden and Lindbergh and lots of other Lind- names.

It’s one possible origin for the baby name Lindy, and it has at least two sources of its own.

First is the Middle English word lind, which referred to a lime tree. File the baby name Lindy with Willow and Rowan.

But there’s also the German linde – gentle or tender. It’s the second element in Rosalind.

The tree connection makes it feel like a modern possibility. But it’s the surname that originally put Lindy on parents’ radar.

Determined to fly from an early age, Charles Lindbergh dropped out of college. He joined the Air Service Reserve Corps and was working as an air mail pilot when he heard about the Orteig Prize. Hotelier Raymond Orteig was offering $25,000 to anyone able to fly nonstop from New York to Paris. Lindbergh scraped together enough cash to buy a plane, named The Spirit of St. Louis.

In other words, he was a total nobody, in a race against far more established adventurers. He even lacked certain skills, like navigating by the stars, that some might have thought necessary.

But in 1927, Lindbergh managed to fly 33 1/2 hours across the Atlantic and claim the prize.

He soared to international fame immediately.

In fact, the aviator probably lent his name to a new dance – the Lindy Hop. Like the daredevil, the dance was the latest, greatest thing right around the time Charles flew across the ocean.

The baby name Lindy was heard very sparingly prior to 1927.

After all, surnames like Linwood and Lindsey weren’t unknown for boys in the era. And girls already answered to Linda and Rosalind.

He and wife endured the kidnapping of their young son.

By the late 1930s, he’d become a Nazi sympathizer and proponent of a policy called America First – staying out of the war in Europe.

Later still, he became a conservationist and campaigned to protect endangered species, as well as indigenous peoples whose way of life was threatened. It’s not enough to rehabilitate his legacy. HBO’s recent miniseries The Plot Against America emphasizes Lindbergh’s most dangerous views.

Choosing the baby name Lindy in honor of Charles today seems unthinkable. And yet, Lindbergh himself is receding into history.

It’s easy to imagine loving the baby name Lindy without any connection to the early twentieth century figure.

THE RISE OF LINDA

The baby name Lindy tumbled in use by 1931. After all, many more daring aviators had made headlines since then.

But something else was happening, too.

It, too, shares roots with the German linde – tender. But linda also means pretty in Spanish, and seems the more likely source of inspiration.

Regardless, Linda became a sensation. It knocked Mary from top spot in the US.

Lindsay and Lindsey both appeared in the US Top 100 in the mid-1980s, though, so odds are that Lindy would’ve still fit right in.

Other formal names for Lindy include Belinda and Melinda, two names that followed Linda up the popularity charts.

Relatively few parents are choosing any lind name right now, and the baby name Lindy has slipped, too. Just 71 girls and fewer than five boys received the name in 2020.

That said, it fits in nicely with multiple trends right now.

It falls somewhere between surnames like Landry and Lennon and retro nicknames like Sadie and Elsie. The Lindy hop makes it feel energetic and maybe a little bit vintage; but the overall sound is informal and breezy. In our age of Remy and Rory, Lindy is a stands-out/fits-in kind of choice.

What do you think of the baby name Lindy? Do you like it better for a boy or a girl? 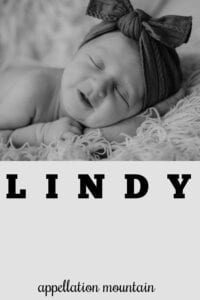