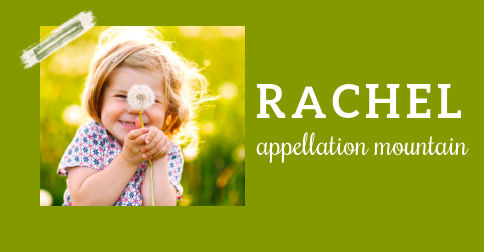 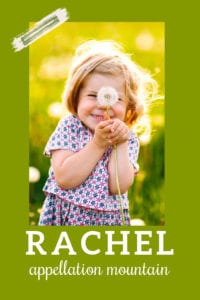 The baby name Rachel rocketed into the US Top Ten thanks to a sitcom, but this Biblical choice feels more like a classic than a pop culture sensation.

Thanks to Kelly for suggesting our Baby Name of the Day.

In a few more decades, silver-haired Golden Girls will answer to Brittany and Courtney, Taylor and Jen.

But unlike some of those names, odds are good that there will still be little girls called Rachel, too.

Consider the statistics: while the baby name Rachel isn’t quite as evergreen as Katherine or Elizabeth, the name has never left the US Top 250. That’s going all the way back to 1880.

After all, the baby name Rachel belongs with the Old Testament choices, just as surely as enduring names like Benjamin and Jacob.

Speaking of Jacob, he’s part of the story. Jacob meets Rachel and tells her dad, Laban, that he’ll toil for seven years to earn his daughter’s hand in marriage. Laban agrees, but pulls a double-cross. On their wedding day, Jacob discovers that his heavily-veiled bride is actually Leah, Rachel’s sister.

But Jacob isn’t deterred. Instead, he works another seven years and marries Rachel the second time around.

It comes from a Hebrew name meaning ewe, as in a female sheep.

If you met a Rachel in many centuries, odds are decent that she’d be Jewish. Fictional Rachels – think Friends and Glee – conform to this stereotype. But ever since the Protestant Reformation, it’s become more broadly common.

President Andrew Jackson’s wife answered to the name, though she died in December of 1822, just as her husband took office.

Other famous women by the name include:

All of these uses helped keep the name in the US Top 200.

But it’s the small screen that boosts the baby name Rachel time and time again.

In 1967, soap opera Another World introduced us to Rachel Davis. Scheming and ambitious, her entanglements made the new daytime drama a smash hit by 1970. A few years later, she did marry for love, but it’s a soap opera – drama followed the character way up until Another World ended its run in 1999.

Maybe the name would’ve cooled, but then along came an ever bigger sensation: Friends.

Jennifer Aniston made famous her character’s choppy layers. And also? Rachel leapt to #9, entering the US Top Ten for the first time ever in 1996.

Two more famous characters followed: Glee gave us an ambitious singer, played by Lea Michele from 2009 to 2015. And then came legal drama Suits, debuted in 2011, with a Rachel played by Meghan Markle, the future Duchess of Sussex.

As for the -ael spelling, it seems to be based on Michael. It’s never been as common as Rachel, but it isn’t new. Charles Dickens used Rachael for minor characters in Bleak House and Hard Times. In 1982’s Bladerunner, Rachael was a replicant – who thought she was a real girl.

Today the most famous bearer of the -ael spelling might be celebrity chef and television host Rachael Ray, but she’s far from the only one.

The baby name Rachel counts as a near-classic; that’s because we really do hear it everywhere, across decades.

It’s broadly tied to the 90s, thanks to Jennifer Aniston’s star turn on generation-defining Friends, as well as her character’s signature haircut.

But others answer to the name, like actors Griffiths, Bloom, Weisz, Bilson, and McAdams. There’s journalist Maddow and singer Platten; plus many more fictional characters I’ve omitted.

The name’s boom in the 80s and 90s tends to obscure this name’s traditional status. Despite some decades in the spotlight, Rachel qualifies as a traditional choice with centuries of history, and some fun quirks. (A variation of the Reuben sandwich is called the Rachel; it’s also associated with the Queen of Diamonds in playing cards. (Judith is the Queen of Hearts; Pallas of Spades; and Argine of Clubs. And don’t forget the whaling ship in Moby-Dick.)

It’s the kind of name that sounds sweet on a child but perfectly appropriate for a district attorney.

What do you think of the baby name Rachel? Is it a classic, or stuck in time with Ashley and Jennifer? 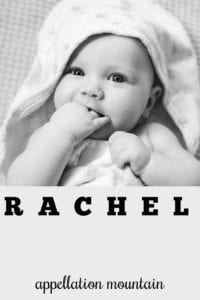