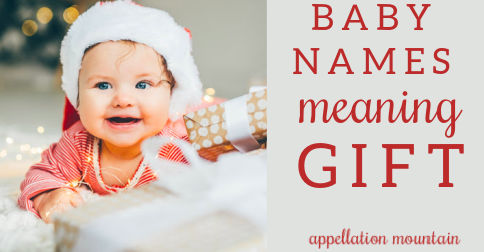 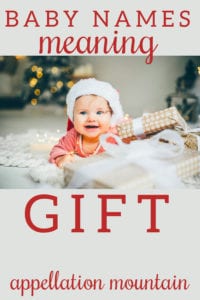 But really, gift is a strong, positive meaning, one that resonates in every season.

They range from the most classic of choices, Top 100 favorites that we all instantly recognize, to rare and surprising possibilities.

This list is packed with richly meaningful options that would be perfect for a daughter or a son.

A masculine Old Testament hero name, Abishai has something in common with popular Abigail. The first syllable means “father.” It’s the -shai that means gift, so Abishai is a father’s gift.

With multiple origins and meanings (and pronunciations, too), Adia feels international and versatile. It’s the Swahili and Hausa meaning that applies here: gift.

The French word for gift, pronounced cah DOE. It’s not used as a name in French, but it feels like a daring possibility in our age of Margot.

The Greek doron means gift. It appears multiple times on this list. But as for Cali, it comes from kallos – beauty. Edmund Spenser used the masculine form, Calidore, in his epic poem The Faerie Queene.

The name of a nymph in Greek myth, Cleodora combines kleos – glory – with gift.

Multiple origins and meanings attach to this name, and spellings abound, too. There’s Darien and Darion, though Dorian feels a little different. One possible origin is the Slavic dar, meaning gift.

We tend to think of Dora the Explorer when we hear this name, but really it’s one of many of this list derived from the Greek doron.

An elaborate name, cousin to several on this list, meaning gift of God. While vintage Dorothea is rare today, several similar choices are rising up the popularity charts.

Dorothy traveled over the rainbow to Oz, which makes this name feel literary and adventurous. It’s also the English form of Dorothea, used for centuries.

Mapudungun is the language spoken in Chile and Argentina by the Mapuche people. Elun means “to give,” so this name has filtered into use in South America.

The Greek eu, of Eugene fame, means good. And so Eudora is a good gift. It dipped into the US Top 1000 as recently as 1924, but has teetered on the edge of oblivion since.

Another Greek name, this time referring to the Egyptian goddess Isis. Dancer Isadora Duncan is a more familiar reference.

The masculine equivalent of Isadora, Isidore was a sixth-century theologian and is now considered a Catholic saint.

Believe it or not, Jesse is cousin to Abishai, via the Old Testament Yishai. He’s the father of King David. That means Jesse has a long history of use, as well as a special meaning.

A handful of sites suggest that John – and all of the related names – means gift. But that’s a stretch. Jonathan, however, comes from yeho, meaning God, and natan, meaning gift.

Almost certainly an obscure variant of Matteo and company, that qualifies Maceo for this list.

The romance language take on Matthew, and powerfully popular choices in their own right.

An enduring classic for a son, Matthew means “gift of God.” That’s true for the many related names, too.

Along with Mathias and Matias, this New Testament name feels just a little fresher than traditional Matthew, but shares all of that strong meaning.

Tolkien created this name in his invented language, Sindarin, for a queen in The Silmarillion. It means “dear gift.”

An Old Testament prophet, this means “he gave.”

Another Biblical boy name, sharing the same roots as Nathan.

A rarity with a fascinating sound, Sunniva is an Old English name that means “sun gift.” It survives mainly thanks to a tenth century saint.

We know Tanaquil was an Etruscan aristocrat who became queen of Rome during her husband’s reign circa 600 BC. It might mean “gift of Thana” or Thalna, a goddess associated with childbirth.

A classic choice for a daughter, long overlooked.

Theodore means “gift of God,” just like Theodora, Dorothea, and all of the related names. It’s also among the most popular traditional names for boys right now.

An Old Testament name, Zebadiah means “God has bestowed.” That’s not exactly gift, but it feels quite close. Plus, Zebadiah is just plain fun to say.

A form of Zebadiah, sharing the same meaning. In the New Testament, he’s the father of apostles James and John.

What are your favorite baby names meaning gift? Would you choose any of these for a child? 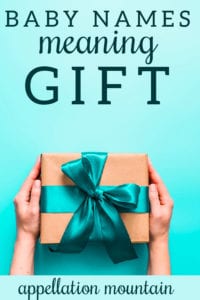 How to Toilet Train your Cat | VetBabble

Does your cat have litter box issues, or are you getting a new kitten? If you answered “Yes” to either