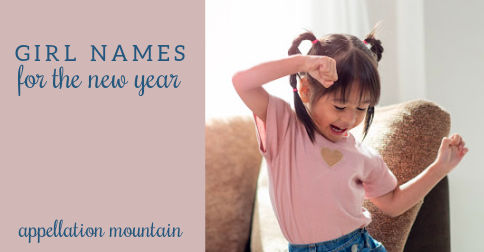 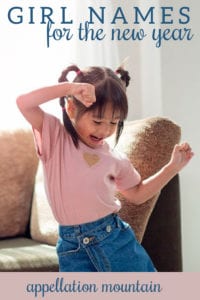 These are my picks for the best girl names 2021 – the ones we’re likely to hear more often. But also ones that I think we should be hearing.

Last year’s list was more about style and sound.

But this year? I found myself thinking deeply about pop culture. What are the names that parents are hearing? Particularly as we all spend more time at home, cocooned with our immediate families and modest comforts.

And so this list leans heavily on the world as it has come into our living rooms this year.

But just being featured in a hit Netflix series alone isn’t enough. It has to sound like the kind of name that parents are after in 2021 – a year we’re approaching with trepidation, but also resilience, and yes, hope.

Actor Anya Taylor-Joy started out the year starring in a successful Emma adaptation – even though theaters world-wide shuttered not long after the film’s release. But then Netflix released The Queen’s Gambit, and we were all at home to watch her star turn as chess prodigy Beth Harmon. The name Emma has no higher to climb, and Beth feels stuck in style limbo. But how ’bout Anya? This Russian form of Anna seems like it could fit with favorites like Mila, Ella, and Ava.

Betty had a big year. It’s sweetly old-fashioned, but for every Betty Rubble, there’s a Bette Davis. Blake Lively and Ryan Reynolds apparently chose this name for their third daughter, born at the end of 2019. The world found out when Blake’s BFF, Taylor Swift, slipped a reference into a new song. It’s not the only pop culture reference, either. While none of it has translated to higher numbers yet, I think 2021 could be Betty’s year.

Does Dalett strike you as novel and invented? You’re right on both counts! Dalett is the youngest daughter born to singer/reality star Larry Hernandez and wife Kenia Ontiveros. Their family has starred on Larrymania for eight seasons and counting, making their daughters together – Daleyza and Dalary – mini-celebrities, too. In May, the couple welcomed a third daughter, Dalett. Based on the popularity of their older daughters’ names, Dalett feels like a logical choice for girl names 2021. The stylish -ett ending helps, too.

Daphne has always seemed like a name that could catch on. After all, we’re wild for Chloe and Penelope and a host of girl names ending with e. And it’s just a little different, the kind of name we all recognize, but isn’t too common. To be sure, Daphne is more popular today than it was in 2000, when it sat at a rare #633. But with Bridgerton casting Daphne as a romantic hero, could this be the moment Daphne starts to rise? I say … maybe.

Diana hovered in the US Top 100 in 1980s and 90s. So that might make this name feel due for hibernation, rather than increased popularity. But with Gal Gadot starring as Wonder Woman and Netflix’s The Crown reminding us all about young Diana, this name was very much in the spotlight as 2020 drew to a close. For parents seeking something classic, but not quite as familiar as Katherine or Elizabeth, Diana might be the perfect choice. The name did bump up popularity in 2018, following the 2017 release of the earlier Wonder Woman film.

First came Disney Channel star Dove Cameron – born Chloe. Then a string of minor celebrities chose the name for their daughters. And Katy Perry and Orlando Bloom named their daughter Daisy Dove. It’s a lot of quiet excitement building around this name. But there’s more: we’ve already embraced Wren. Dove benefits from the ‘v’ sound. And while nature associations alone can boost a name, Dove benefits from so much powerful symbolism, too.

There’s no question Eliza has been quietly trending for the last decade or so. It’s a traditional choice with more energy that buttoned-up Elizabeth. And while multiple nicknames make Elizabeth a shape-shifter, Eliza’s ability to be in used in full – no nickname required – surely appeals to many parents, too. But the real reason Eliza seems headed for the US Top 100? Hamilton, of course. Ever since the musical debuted on Disney+ this summer, the world has seen – and heard – Philippa Soo and her cast mates sing the name. The character is strong and principled, too, increasing the name’s appeal, and reminding us that it’s plenty traditional. (Though yes, Eliza Schuyler Hamilton started out as an Elizabeth.)

Frankie returned to the US Top 1000 for girls in 2015 and has climbed steadily since. A handful of pop culture references helped – Drew Barrymore’s younger daughter, a character on FX series Better Things. But Frankie feels like a logical successor to Charlie, a unisex nickname name first connected to Frances and Francesca, but now also possible as a stand-alone name.

Take Emma, then add extra sparkle. This simple name comes from the Italian word for jewel. It debuted in the US Top 1000 in 2008, but has since reached the mainstream – much faster than you might’ve expected. Actor Gemma Chan, of Crazy Rich Asians, Let Them All Talk, and coming in 2021, The Eternals, has helped the name’s profile continue to rise.

An Italian feminine form of John, Gianna make headlines early in 2020, when Kobe Bryant and his daughter, Gianna, perished in a helicopter crash along with six other passengers and the pilot. A promising basketball player, Gianna tragic loss has certainly put the name front and center for many parents. Kobe’s former teammate, Pau Gausol, named his daughter Elisabet Gianna in September, honoring their memory.

Last year’s list included Gwen, inspired by everything from Spider-Man to Gwen Stefani. There’s even a Princess Gwen in the upcoming Camila Cabello version of Cinderella. But maybe it’s Gwendolyn we should be watching instead. After all, Evelyn is a Top Ten sensation. And Gwendolyn continues to make slow, steady gains on the popularity charts, too.

In fairness, Hope might be the middle name sensation of 2021. But it feels like more families might choose to put it front and center following a challenging, painful year.

Even without a terrible, horrible, no-good year, elegant and hopeful Iris was poised to rise. It’s an ecovintage pick, part-nature name and part-antique, just like Lily or Rose. And the Goo Goo Dolls’ 1998 power ballad “Iris” remains in the memories of an entire generation of parents. But the symbolism – Iris is the goddess of rainbows – feels especially powerful now.

Jovie made last year’s list, too. While I mostly avoided repeats, I wonder if Christmas movies are a little different this year. Instead of just managing to watch one or two while decorating the tree or wrapping presents, movies became An Event. The only event, really. And Elf’s Jovie – initially cynical but curious, and ultimately hopeful – seems like the hero we all need right now.

Here’s the thing: we don’t name babies after political figures anymore. Gone are the days when kids were called Jefferson or Franklin in response to a newly elected president. But we do name our children after heroes. This applies in two senses: first, Kamala Harris’ status as the first woman elected vice president – among many other firsts – might inspire some parents, beyond political considerations. But it’s also the name of a character in Never Have I Ever and the name of the new Ms. Marvel. The superhero is set to leap from the pages of comic books to a new Disney+ original series in 2021. Combined with how much we’ve talked about the name Kamala and its rich meaning, it’s easy to imagine this one making parents’ short lists.

Magnolia benefits from some of the same currents lifting Iris. But there’s another factor here. Chip and Joanna Gaines became HGTV celebrities on Fixer Upper, but the duo’s business is called Magnolia Realty. They own Magnolia Market in Texas, too, and now they’re launching Magnolia Network – a whole television series devoted to their lifestyle brand. There’s something southern and aspirational about Magnolia. Plus, it’s been in use as a given name for well over a century, making this feel more like a traditional comeback than a design-inspired novelty. Nicknames like Maggie and Nola make it even more wearable.

Country crossover singer Maren Morris hit it big just as parents were considering this name. It’s tailored and vaguely traditional. Some link it to Margaret or Marina; others connect it to the evergreen Mary. It’s rich with surname style without actually venturing into Harper/Madison territory. And while many of us were predicting Marlowe would be the next big thing, it seems like Maren has taken the baton instead.

Traditional and principled, Ruth feels like a vintage name poised to follow choices like Eleanor back into favor. But, of course, 2020 is also the year we lost towering Supreme Court Justice Ruth Bader Ginsburg. Other trailblazing female justices’ names rarely appeal, if only because they’re not quite ready for revival at the moment the women who wear them are in the spotlight. Sandra Day O’Connor, for example, was appointed in 1981 when her name still ranked in the Top 100, but was fading. When she retired in 2006, the name was still sliding towards style limbo. None of that really compares to Ruth’s potential in 2021.

Maybe it’s too much to include both Frankie and Stevie on the same list. After all, they’re lifted by the same trends and both feel like successors to Charlie. But Stevie has something else. First, the appeal of legendary rock star Stevie Nicks – born Stephanie. And more recently, Schitt’s Creek’s Stevie Budd, the local girl whose life gets upended with the Rose family arrives in town on the hit sitcom.

Sylvie could be just one spark away from catching fire. And yet … so far, the flame hasn’t caught. Tessa Thompson recently starred in Sylvie’s Love on Amazon, but the romance might not be enough to launch the name higher. Then again, Sylvie succeeds on sound, an alternative to Sophia and Ava, Sienna and Ivy.

We’ve seen YouTubers and Instagram stars influence name trends, particularly as they graduate to mainstream success. But Stephen “tWitch” Boss started out as a successful dancer and choreographer before becoming a TikTok sensation with wife and fellow dancer, Allison Holker. Their kids regularly appear on their channel. Youngest daughter Zaia was born in November 2019. You kind of imagine that maybe they’re just joyfully dancing around their house, all the time. And that makes Zaia feel like a happy name.

There you have it – my picks for the best girl names 2021! Can you imagine hearing more of these names in the future? What would you add to the list? 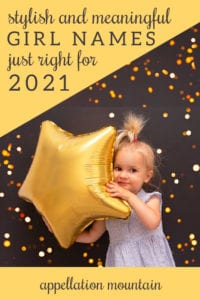