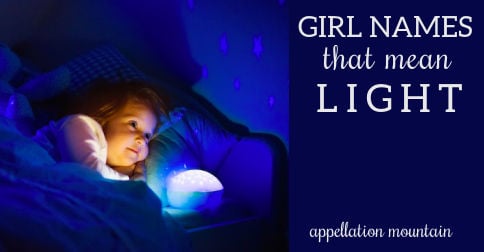 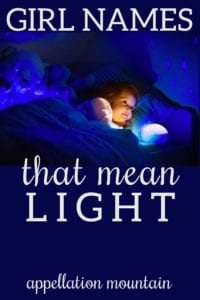 Girl names meaning light and bright can feel especially suitable in the dark of winter or at the height of summer.

They’re names that signal hope and warmth, whether it’s from candles in the darkness or sunshine on a spring afternoon.

These girl names glow, though not all of them are equally well known. From the current Top 100 to rarities seldom heard, it’s a list that could appeal to any parent’s style.

After all, it’s a meaning that appears across languages and cultures. Every part of the world could easily be represented here, though I’ve stuck to ones that feel more accessible in English.

If you’re looking a positive, uplifting meaning for your child, girl names meaning light is a great place to start.

This name means radiance in Gaelic. It’s pronounced like Anya, and should be spelled with an accent: Áine. In mythology, she’s queen of the fairies.

No matter the spelling, Alena and Alina almost always come from longer names – Magdalena and Adelina, to name just two. But some of those longer versions – like Albina – do, indeed, mean bright. Which just barely sneaks Alena and Alina on to this list.

An elaborate and rare winter flower name, Amaryllis comes from a Greek word meaning “to sparkle.” Virgil named one of his characters Amaryllis in the Ecologues; the flower takes its name from her.

Another flower name, but Aster came from the Greek word for star. Many night sky names could make this list.

Bertha feels stuck in style limbo, but the name is derived from the Germanic element beraht – bright. It’s the same element in Alberta and Roberta, which might be slightly easier to imagine making a comeback.

We all know Cassandra as an ill-fated Trojan princess. But the first half of her name is related to a Greek word meaning shining. While Cassandra had a good run in the 1980s, it feels traditional – not tired – today.

The Italian form of Clara, made famous by Saint Clare of Assisi, and now mixed up with the Irish Ciara. While the Irish name means dark, all of the Clara names share a meaning: bright or clear.

The French form of Clara, this tailored name is also spelled Clare.

Vintage, sweet, and strong, Clara has become a Top 100 favorite in recent years.

A long list of Hindi names relate to light. Diya means lamp. Diya rhymes with Mia, which might make it particularly accessible to English speakers.

Eleanor sometimes claims meaning that fits this list. But the spelling Elanor absolutely belongs. That’s because JR Tolkien invented the Sindarin name. It means “sun-star flower.” She’s the daughter of Samwise, born with golden hair – rare amongst hobbits – so Frodo suggests this name would be fitting.

This gorgeous Hebrew name combines a stylish sound and an uplifting meaning: God is my light.

While Eloise almost certainly comes from Germanic elements with a very different meaning, it’s sometimes connected to the Greek helios – sun. While this is folk etymology, it’s still appealing.

Helen means torch, as do Ellen, Eleni, Elena, and all of the many Helen-related names.

A Hebrew name, Keren can mean “ray of light.”

It’s a Leo name with a strong Kate sound, best known as the name of a third century Spanish saint. The name is related to the Latin leukos – light.

In the Old Testament, Lebanah is another name for the moon. Levana could be many things, but one of those is an update for the Hebrew original. If you know the YA Lunar Chronicles series, Levana has an even stronger connection to the moon.

While not all of the Luc/Luk names come directly from lux, a great many are connected. That means Lucia, too, belongs on this list.

Lucia became Lucilla, which in turn inspired the French Lucille.

Cervantes created this Lucia elaboration for his 1605 novel Don Quixote.

Among the most mainstream of the girl names that mean light, Lucy is a Top 100 favorite.

A Harry Potter heroine name, borrowed from the Latin and Spanish word for the moon.

The Latin word for light.

The sparest option on this list, she’s simply the Latin word for light. The Spanish Luz is similar, but picks up an undercurrent of Roman Catholic saint, thanks to her association with another epithet for Mary, Our Lady of the Light. Like many an ends-in-x name, Lux could be a gender neutral option, though The Virgin Suicides character is current enough to make this generation of parents consider her a girl’s name – and perhaps an unlucky one.

The Spanish form of Lux, often given in combination with Maria, thanks to Mary.

Mahina is both the word for moon in Hawaiian, and the name of a lunar goddess.

Often associated with Mary and Maria, Marilla can also come from Amaryllis, which earns it a spot on this list. (Though Marilla Cuthbert is my first thought.)

Along with Mira and Meera, several origins and meanings attach to Meira. But at least one is Hebrew, in which case Meira means “giving light.”

In Arabic, Noor means light. It’s also spelled Nur. Some even extend this meaning to Nora.

Another name from Greek myth, Phoebe means bright. She’s associated with the moon, and there’s a moon of Saturn that bears the name. There’s also the smoosh name Belphoebe, invented by Edmund Spenser for his 1590 poem The Faerie Queene.

A Persian name in use across the centuries, Roxana means either bright or dawn.

The Welsh word for star, and a modern, tailored possibility.

A Gaelic name meaning radiant, the ‘ch’ is pronounced like a K.

The Latin word for star, and a favorite with parents today.

Fast rising Thea comes from the feminine form of Theodore. But Theia was a primordial Greek goddess of light, one of the Titans. She’s mother to Helios (the sun), Selene (the moon), and Eos (the dawn.) So perhaps either spelling carries a little bit of the meaning.

A name meaning bright or shining, made famous by the Jolie-Pitt daughter.

An Arabic name meaning light, glow, or splendor, Zia sounds like Mia with a Z.

What are your favorite girl names meaning light?

First published on March 9, 2012, this post was revised substantially and republished on December 17, 2020. 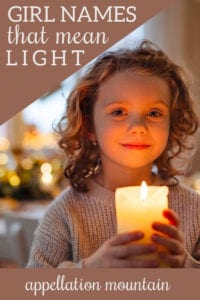 His Holiness The Pope: Pets With Crocs Hats