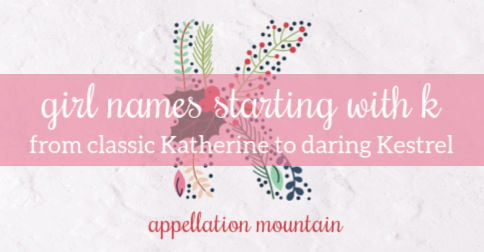 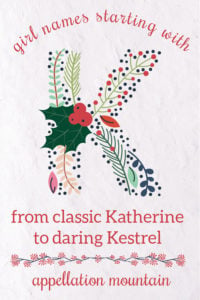 Girl names starting with K include some of the biggest sensations of our time. Just think of Game of Thrones’ Khaleesi. Or the entire Kardashian family.

In fact, there are far more girl names starting with K than could fit in this post. It’s the sixth most popular first initial as of the 2019 data.

Of course, that sometimes leads to a little bit of K backlash. Some parents love the idea of invented names like Kailynn and Kaedee. Others feel it’s a little like a game of onomastic mix and match, and try to avoid them.

Some of those inventions do filter into general use, of course. Some of them are now among the most popular names in the US. After all, surname-style Kinsley outranks former Top 100 picks like Kimberly and Kaitlyn.

Let’s dive into all of the girl names starting with K.

A presidential surname name, Kennedy has become a mainstream favorite for our daughters, just like Madison.

A surname name with Anglo-Saxon roots, Kinsley followed Kelly and so many other K names up the popularity charts.

An evergreen classic, Katherine-with-a-K is more popular today than Catherine-with-a-C, but the two names have swapped places depending on the decade.

Made internationally famous by Australian pop star Kylie Minogue, this names owes much to masculine name Kyle, and something to Kaylee and company, too.

Chloe has become a modern staple. The Kardashians reminded us that it can be spelled with a K, too.

Soap opera Days of Our Lives helped launch this name in the 1980s.

An early surname-style name, Kimberly became a breakout hit in the 1960s.

One of several possible spellings of ancient name Camilla.

It looks like a streamlined spelling of Callie, but Kali is a Hindu goddess name.

Grammy-nominated singer Kehlani put this spelling of her Hawaiian name on the charts.

Kiara could be a K-spelling of the Irish Ciara or the Italian Chiara.

Possibly a Scandi nickname for Katarina, Kaia might also be another name in the key of Maya. Supermodel Cindy Crawford’s daughter Kaia is following her mom’s career path.

Affectionate nicknames for Katherine, Kate and Katie have long stood on their own, too – especially spare, strong Kate.

Kehlani ranks higher, but Kailani is closer to the Hawaiian original: a mix of words meaning ocean and heaven.

Keira Knightley’s parents intended to spell her name Kiera, the Anglicized form of Irish Ciara. But they transposed the letters. The actor’s fame has made this spelling dominant.

A Russian feminine form of Cyrus, Kira’s early popularity is likely due to Russian figure skater Kira Ivanova, an Olympic medalist in 1984 and regular on the world stage in the following years. In fact, Keira Knightley’s name was inspired by the skate.

Short for former favorite Mackenzie, Kenzie fits right in with Kinsley and other K names.

Traditional Irish name Caitlin was respelled when it reached the US. Kaitlyn was long the most popular, though it has faded in recent years.

A favorite for our sons, this Hawaiian name meaning sea has potential for our daughters, too.

An intriguing import from Japan, Kairi comes to the US via video game Kingdom Hearts.

Kaylee meets Paisley, though it is sometimes found as a surname.

Another Kehlani-Kailani cousin, though Kalani’s meaning is different: the sky, or heaven.

A modern name, rising along with Amiyah and Jamiyah.

Zoe Saldana made flower name Cataleya popular in 2011 movie Colombiana. The C spelling remains more popular, but both are climbing.

Another form of Katherine.

Another Hawaiian name relating to the sky, though Keilani’s meaning is “glorious heaven.”

As Kenzie is to Mackenzie, Kenna is to Makenna. Or possibly it’s just a feminine form of so many established Ken- names.

The German spelling of Kora, long outranked by the C spelling in the US. Nickelodeon’s The Legend of Korra might also give a boost to the K spelling.

Another Kira spelling, made popular in part by actor Kyra Sedgwick.

A bird of prey makes this an avian name fiercer than Dove, but every bit as wearable.

An artist surname name that fits with Willow and Margot.

It looks like a creative twist on Katrina, but Katriel is a Hebrew name meaning crown of God.

Inspired by a medieval saint in the Eastern Orthodox Church, also known as Saint Kassia. The hymns she composed remain part of the Byzantine liturgy today.

This Japanese name comes with a compelling meaning: flame.

A surname name put on this list by actor Ellie Kemper.

A name with African roots meaning “the loved one,” it was made famous by author Ibrahim X. Kendi.

What are your favorite girl names starting with K? 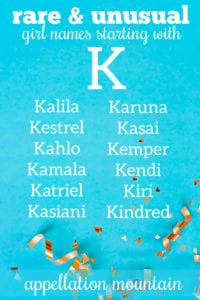 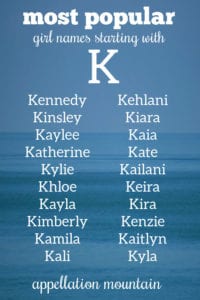