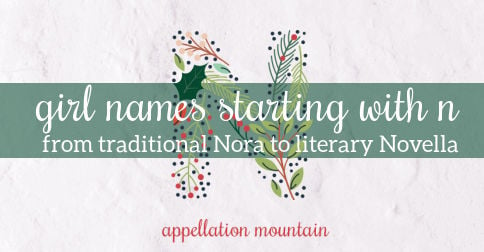 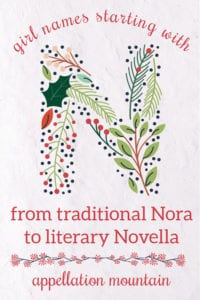 It’s the eleventh most popular first letter for girls names in the US as of 2019. That puts it right in the middle of the pack, well behind the chart-topping letters like A (Ava and Amelia) and E (Evelyn and Emma), but well ahead of letters like F and W. It’s easy to think of N names for girls, but they’re not exactly everywhere – the most popular pick – Nora – stands at a modest #29 as of 2019.

But N choices for our daughters remain a diverse and intriguing pool. Nancy has grown up from girl detective to pop singer to powerful politician; the sensational rise of Nevaeh remains one of the most polarizing name stories of the early twenty-first century; and names like Nora have become culture-spanning chameleons that fit just about anywhere.

Whether your tastes run to the traditional or the bold, the wildly unexpected or the oh-so buttoned-up, N names for girls could satisfy.

Short for Eleanor – or maybe other names with the right sound – Nora is nicely international. It works in English and Arabic, Italian and Norwegian. Nora feels almost classic, a traditional pick – and yet it’s quite stylish now, too, a sister for Emma or an alternative to Charlotte.

Natalia Zakharenko, the daughter of Russian immigrants, became a star as Natalie Wood. She starred in 1947’s Miracle on 34th Street as a child, 1955’s Rebel Without a Cause as a teenager, and racked up a trio of Oscar nominations by the time she was in her early 20s. She also helped launch her adopted name, a Top 100 favorite since 1976.

The Latin word for new, associated with stars and science, Nova succeeds for these associations. But sound helps, too – just ask Ava, Evelyn, Everly, Vivian, and so many more middle-V favorites.

Nevaeh is heaven spelled backwards. Sonny Sandoval, frontman for Christian metal band P.O.D., gave the name to his daughter in the year 2000. While Sandoval’s daughter wasn’t the first, the name was new and very rare when at the time. A year later, Sandoval appeared on MTV’s Cribs, and Nevaeh took off. It succeeds on sound and meaning, but also provokes strong feelings and snarky comments galore.

As pan-European as Sophia/Sofia, Natalia is the Latinate form of everybody’s favorite, Natalie. It refers to Christmas Day, from the Latin phrase natale domini and familiar thanks to phrases like Buon Natale, Italian for Merry Christmas.

Simply Nora-plus-an-h. It might make the name feel more like an independent choice rather than a nickname. It also recalls another traditional favorite: Sarah.

Another Christmas-inspired name, this time from the French word for Christmas. Noel is considered masculine, but is little-heard in the US.

A long-time favorite in the US, this French feminine form of Nicholas – “victory of the people” – ranked in the US Top Ten from the late 1970s into the 1980s. While it feels more mom-name than daughter today, it’s likely to make a comeback – eventually.

A Kyla/Mylah invention, Nyla feels like an obvious twenty-first century creation. But there’s also the Arabic name Naila, which means “attainer” – or maybe “winner” – and adds some history to this appealing sound.

This name backflipped its way into the spotlight when teenaged Romanian gymnast earned the first perfect 10 in Olympic history. The year was 1976; the event, the uneven bars. She’d win another four medals at the Montreal games – three gold, plus a silver and a bronze – and go on to have a long, celebrated career.

It’s a masculine name in Sanskrit, but Disney’s Lion King gave the name to Simba’s friend/future partner. The name also has legit African roots. In Sotho, a Bantu language spoken in South Africa, Zimbabwe, and Lesotho, it means prosperity.

A Hawaiian name meaning heavenly, Nalani is following fast-rising cousins like Leilani, Kehlani, Kailani, and Alani up the popularity charts.

From girl detective Drew to singer Sinatra to politician Pelosi, lots of famous women have answered to the name Nancy. Along the way it’s grown up nicely, evolving from mid-century favorite to near-classic status.

Originally a Russian nickname for Natalia, Natasha is a character in Tolstoy’s War and Peace. It was big in the US in the 1980s, and even bigger in the UK into the 90s. But while it’s falling fast in recent years, the name has plenty of history to buoy it up.

A color name in the hue of blue, Navy could follow middle-v favorites like Ava and Ivy up the charts, but also owes a little to Scarlett, Ruby, and Olive.

We tend to hear Nayeli as Latina, and it first caught on in Mexico. That’s because it comes from a Zapotec phrase meaning “I love you.”

She was the mean girl of Little House on the Prairie fame, but decades later, Nellie sounds like a sweetly vintage sister for Sadie, or an alternative to Millie.

A just-slightly-different spin on Mia, Nia is also the Swahili word for “purpose.” It’s one of the seven virtues of Kwanzaa, which makes it deeply significant.

Effortlessly pan-global, Nina exists in dozens of languages. It means “girl” in Spanish, but also serves as a short form of names like Antonina – itself an elaboration of Antonia. There’s a Saint Nina, especially significant in the Georgian Orthodox Church. And the name also occurs in indigenous languages in North America.

It looks like an attempt to feminize Top Ten staple Noah, but this name actually has separate Old Testament roots. Given to the daughter of Zelophehad, the name means “motion.”

The form of Naomi used in several European languages, including Spanish and French, Noemi opens the door to Emmy nicknames. Noemie is also seen, but even less frequently in the US.

Nola might be short for Magnolia or other names with a similar sound. It’s the abbreviation for New Orleans, Louisiana. And it also feels like the kind of name that fits right in with Mila and Lyla.

Billie Letts’ 1995 novel Where the Heart Is gave this invented name to a character; Natalie Portman played Novalee in the 2000 movie adaptation. It’s been used in steadily growing numbers since.

Another globe-spanning possibility, Naima means happy in Arabic and serves as a Scandi form of Naomi.

A shorter form of Antonella, a longer form of Nell, or an just-formal-enough option to go with Nellie, Nella also brings to mind Harlem Renaissance author Nella Larsen.

A name borrowed from Irish legend, or possibly Hebrew, Nessa might be most familiar to parents thanks to novel-turned-musical Wicked’s character Nessarose Thropp. (She’s sister to Elphaba, the future Wicked Witch of the West.)

If it’s an Anglicized version of Niamh, then it means bright – and rhymes with Eve. But actor Neve Campbell’s name is a family heirloom that rhymes with Dev and Kev. It might also be a winter name, inspired by the Spanish nieves – snow – and the Italian word for snow, which is neve, but pronounced almost like navy – neh vay.

The Arabic name that inspired the Top 1000 favorite Nyla.

Nicole has been a long-time favorite, but Nicola remains under-the-radar. It sounds more like Ricola cough drops than the more familiar Nic- names.

A Spanish feminine form of Noel, Noelia is an even frothier take on Noelle.

Before you dismiss Normandy as unwearable, consider this: French region name Brittany spent a decade in the US Top Ten, peaking at #3. Factor in Normandy’s potential nickname Nora and the fame of singer Normani – similar, if not quite the same – and Normandy starts to seem like a rarity with potential.

It sounds like an elaboration of Nova, but a novella is also a short novel. That makes this name literally literary, but no less wearable.

What are your favorite girl names starting with N? What would you add to this list? 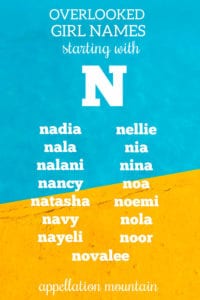 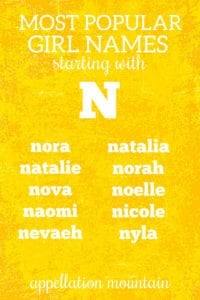