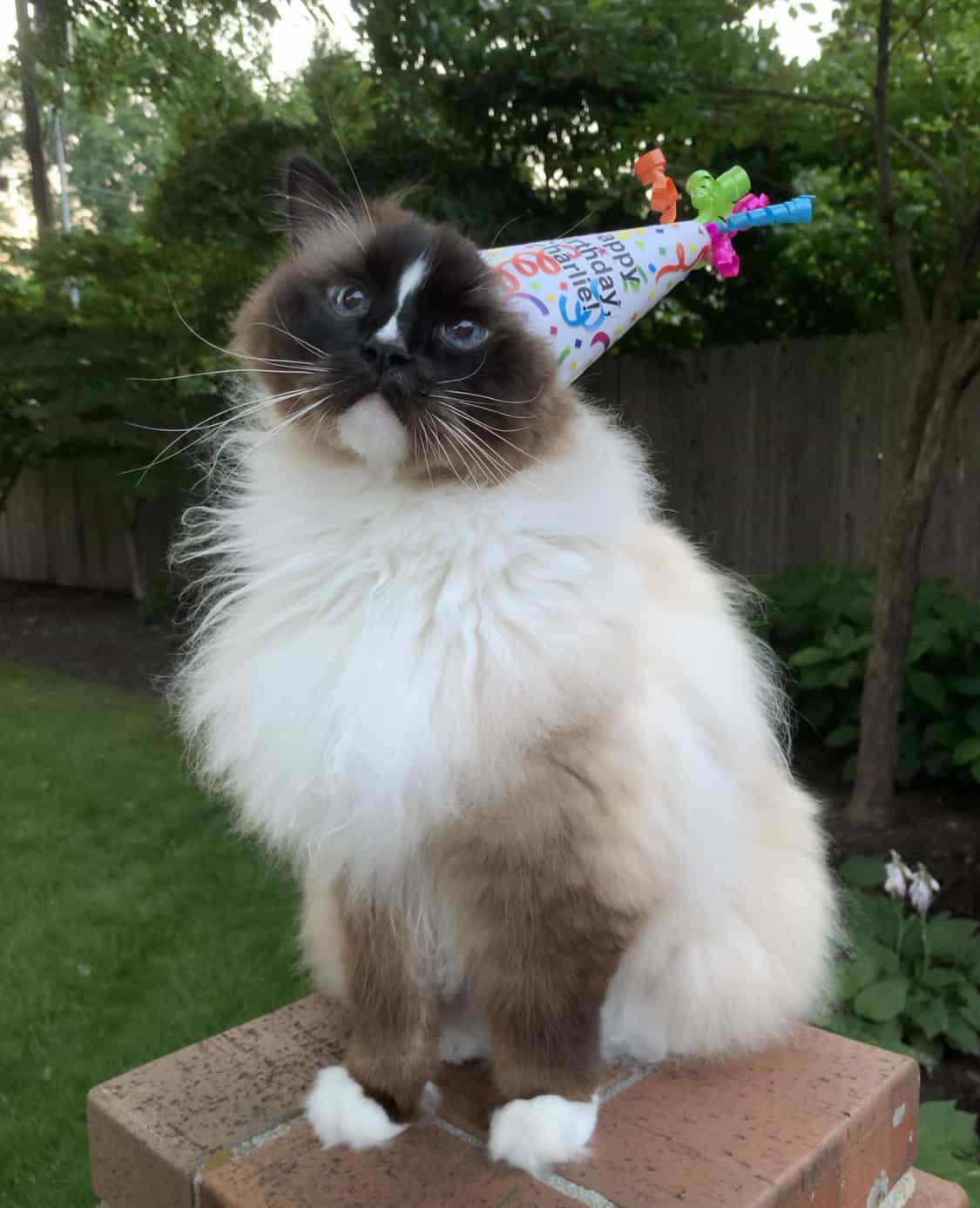 
I CANNOT believe my Charlie is 12.

I knew I wanted two male cats for my next cats – and knew I wanted one related to Rags and the other could be whatever, but one had to be a seal mitted with a blaze. I was in Albuquerque, New Mexico for 6 weeks when I checked Soulmate Ragdolls’ website and saw Charlie’s sweet little face staring at me. My stomach dropped. I wasn’t ready for another kitty yet – Rags had only been dead a few months – but I KNEW that cat was mine.

And his name was “Casey” – pronounced, “KC” which is where I am from.

However, his parents were not related to my Rags – so then the search began to find another – and as luck would have it, a cat related to Rags had given birth to another male – I didn’t care about his color or pattern – but that was my Trigg, a blue lynx mitted Ragdoll cat.

Charlie is an outgoing, adventurous soul – his ONLY fear is the vacuum cleaner. HE HATES VACUUMS. Whenever I bring out my upright to vacuum or my stick vacuum, he will run all the way to the basement and hide behind the furnace. His fear of the vacuum cleaner came in handy early on in his life. I had to get him to stop jetting out the front door.

So one day I put the vacuum outside, but plugged in on the inside of the house. I opened the front door and as soon as Charlie approached it, I turned on the vacuum. That was it – he has not ever tried to jet out the front door since. Perhaps that sounds mean, but the alternative is being hit by a car, which I could not handle.

Charlie is the first cat I have had that seriously changes his coat according to the season – his winter coat is 2-3x as thick as his summer one. And he thins down in the summer and beefs up in the winter.

Charlie is the epitome of a Ragdoll when it comes to being a “puppy cat” – he is most always where I am. I am in my basement right now, typing this post and he is behind me. I just turned around to look at him, when we made eye contact, he meowed.

Charlie meows a lot and always has.

He just started meowing now because he heard me playing that kitten video. I remember watching his baby meow then and not really knowing him. Now, I feel like I fully know him and see all of him in that kitten video.

Charlie loves when a bed has been freshly made – he just goes nuts all over the bed.

He LOVES to go outside. Unlike Trigg, who more or less stays in one place, Charlie always walks the perimeter of my yard – monitoring his domain.

He has run up trees – and will run full speed through the yard.

If Charlie had his choice, he would be able to roam the neighborhood and keep all cats in their place.

He is NOT a Ragdoll in that regard – he would definitely put up a good fight – he has thrown himself at my back door to try to get at my parents’ dog who was visiting in the backyard – howling and growling. He is DEFINITELY a dominant cat.

He loves to go in the garage and climb all over my car, which I allow randomly – I always make sure there is no antifreeze leaking on my garage floor, so that he cannot lick it and go into kidney/liver failure.

I have had some issues with Charlie recently – getting him to eat – which happens every now and again. This year, our new veterinarian suggested I give him B12 shots which I was very accustomed to giving with Caymus and Murphy. But Charlie turns from Charlie into Chucky. So here’s hoping he never needs fluids, as I am screwed if he does given how he responds to a simple B12 shot.

I think the reason he reacts so severely is because he has flat hair follicles. A Scandinavian veterinarian told me that early on in Charlie’s life after seeing him in a video on our YouTube channel. She called his coat a “crepe coat” and said it is ideal for Scandinavia because it takes forever to get wet – but that is very sensitive to touch and feel. It really helped me understand Charlie.

I used to think Charlie was just neurotic with certain things – rain, wind, drops of water falling off of me after a shower…because he would almost freak out when Chiggy wouldn’t react at all – and he reacted to things my Rags never did. So that insight into his coat really made sense. He does have a great coat – it’s like he stuck his paw into an electrical outlet – it all sticks out – does not lay flat.

Charlie has been a godsend when it comes to my cat product reviews. He is always a willing participant, and will always look at me when I stage him for a photo next to a product.

I always had a great eye contact relationship with my Rags and had hoped to have it again with my current cats. Charlie fits that bill. I can look right at him and he knows what I want. Chiggy is hit or miss with the eye contact.

Charlie makes about everyone who meets him smile, namely my dad and our new veterinarian. There’s just something about him that brings you joy – but he doesn’t like for strangers to pet him. He likes to meet them under his terms – but don’t reach for him and pet him. Only I am really allowed to do that.

Charlie is a sweet soul – but definitely like me – keeps a tough exterior until he knows he can trust you and then he’s a sweetheart.

Happy 12th Birthday to my beautiful Charlie! I hope we have more than 12 more years together.