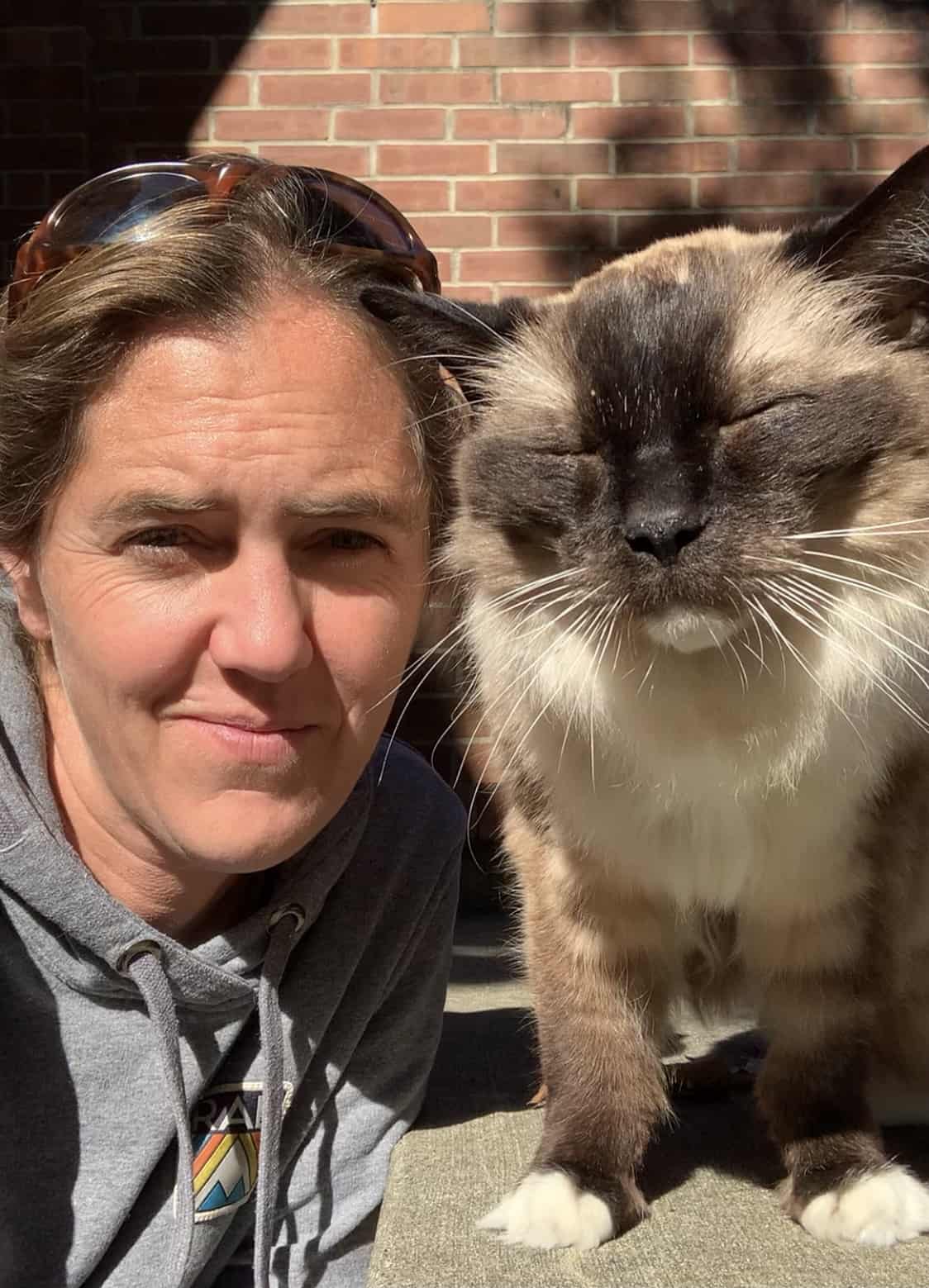 
Today would have been my parents’ Caymus‘ 17th birthday.  I have celebrated it on the site for so long that I wasn’t sure what I was going to do today for it.  Skip it?  Not mention it?

Caymus died on December 12, 2020 after a 6-month battle with chronic kidney failure.

The last 6 months of his life was such a stressful time, but also such a precious one….one that I wouldn’t have traded anything for.  I say stressful because you know the end is inevitable, but you don’t know when that end is.  A month?  A week?

Although we changed veterinarians in the final months of his life – last 6 to be exact – the veterinarian he had had for 15 years gave him about 2-3 months to live based on his bloodwork.  The new one told us it was up to Caymus – and she was right.  It was up to him.  I never begged him to stay.  But I thanked him for every day he gave me.

What a magnificent soul he was, and so elegantly displayed that until the end.

We had a daily routine.  My mom would give him a few pills (think he was on 4-6 pills – I have it written down somewhere and hope to put it all in a blog post one of these days) in the very early morning and then I would get there around 9am to give him fluids.

He knew the routine.  I would come into my parents’ house singing his name – “Ahhh…Cay-cay-newin!” over and over again until he came sauntering into the kitchen (where I was running warm water into a bowl to get his fluids warm) and then we would go to the basement where there was a door to the outside and nice steps to sit and smell on.

Of course, as his disease progressed, he wouldn’t always come sauntering in.  Sometimes I would have to go and find him – which was always scary too, as I didn’t always know what I was going to find.  I tried to stay in high spirits and would always cry on my way to my house.

Most of Caymus’ life, I pulled on his energy to find peace and serenity. As soon as I found out he was sick, I gave him all of my energy and never pulled on his energy again. So by now, it’s been over a year since I held him with sweet relief and complete peace. I miss that tremendously.

Back to our daily routine – while I was waiting for fluids to warm, we would go outside and stroll or simply sit and smell.  Often times that was also when I would do a live video for Floppycats’ Facebook to give you guys an update on how he was doing.

It was always pretty obvious when Caymus needed fluids – his “fluid boob” from the night before would be gone and you could just tell from how his energy level was.

Murphy (Caymus’ half brother) and Caymus were a bonded pair – not terribly surprising that they died 6 months apart – Murphy died on 6-6-21. Murphy, though, was in much better health than Caymus at the time Caymus was dying.  Murphy always joined us on our walks outside.

Once Caymus was ready to come inside, we would do his fluids.  He was just a good boy about his fluids – nearly always sat there and just let me poke the heck out of him. I always tried to get a good stick the first time, but I wasn’t always perfect. Sometimes I would poke from one side of his skin to the other – straight on through his skin. So then I would have to repoke to make sure I got the needle under his skin. And as they get skinnier, it is harder to knock that out.

I learned sooo much from him.  I learned how to give fluids by myself (I had given fluids to my Rags, but always had help) – thanks to my sister who had the courage to try it by herself and gave me the motivation to do the same.  But, not only did I learn how to give it to Caymus between his shoulder blades, but I also learned how to give him fluids near his back or side belly.  I learned this spot because as his body deteriorated, the fluid boob would fall to his leg and then make his leg incredibly swollen, so his veterinarian taught me how to do it towards his side belly so that the fluid boob would fall to his belly and not to a leg.  Sometimes I would still screw up, unfortunately and he would have a swollen leg until the fluids were absorbed through his capillaries.

If we didn’t have a veterinarian appointment, and believe me – we had a lot, then I would go home to work and be with my cats and then return about 11-12 hours later for his next round of fluids – the evening fluids.  My mom was too scared to do the fluids by herself – and sometimes my sister helped me by coming over and doing them, but mostly I did them and it was always my special alone time with Caymus.  I would love on him and tell him how awesome he was and thank him for all the peace and comfort he brought to my life.

We would then go outside again – usually Caymus, Murphy and me – to the front driveway and they would walk and sniff.

When we had days where we were headed to the veterinarian, I stopped putting Caymus in his carrier and let him ride on my lap – it was a 25 minute trip both ways and well, he was dying anyway, so wasn’t a big deal in my head if we got into a crash and he died (this is my way of saying I know it’s not safe for him to ride on my lap in my car – but I also didn’t really care about safety in those months).

I mean, it would have sucked for him to die in a car crash, but chances were low and he was dying anyway, so might as well let him live as much as he could until then.

So he rode on my lap or wherever he wanted to be in the car, but it was usually on my lap looking out the window all the way there.  I loved it and miss that. Caymus wasn’t a lap cat – the one cat I wish would have sat for hours on my lap, so I loved that he wanted to be on my lap in the car.  I would talk to him the whole way to the vet, cry to him, whatever just came my way kissing and hugging on him when I could.

He was such a champ at the vet’s office – he let so much happen to him that I am sure Charlie will never go for – from ozonated saline (cold) being injected sub q near his kidneys to ozone gas being shot up his rectum.  What veterinarians were and what I was allowed to do to him was unthinkable, unheard of.  He knew I was trying to help him and for sure, ozone gave Caymus several more quality months of life.

After his rectal ozone appointments, we had a 25-minute drive home.  And one of the benefits of rectal ozone was that the penetration into his anus helped to stimulate his need to poop.  This was a great benefit of ozone for a kidney cat.  I learned early on to give him some time to go #2 before we left the parking lot.  He would always explore my car and then when he was ready to poop, he would go back into his carrier and squat to poop.  I would always have a paper towel ready to catch the poop as it fell into my hand.  I would then bring the poop into the vet’s office for disposal, so we wouldn’t have a stinky ride home.

As Caymus’ body changed chemically, so did his sleeping spots.  He always slept at night time on my parents’ bed – probably 5 months or so before he died, he stopped sleeping on their bed and started sleeping in a Fukumaru box I had brought over.  A Floppycats’ reader had posted about the box, so I got one for Charlie and Trigg, but brought it over for Caymus as soon as I found out he was sick.

He slept in that Fukumaru box day in and day out.

I think it was 1 week or maybe less before he died – he moved to a spot by my parents’ bathtub. I had remembered from my Rags’ passing that cats switch their sleeping spots when they are getting close to death (a healthy cat also changes sleeping spots seasonally – but a sick cat changes sleeping spots more often/frequently – and they are usually spots they didn’t sleep when they were healthy).  So the change to a new sleeping spot made my stomach hurt – and sure enough, days later, I knew why.

He ate the day he died, but he could not defecate on his own any more. He struggled to walk as well.  I would have put him down a day earlier than we did, but it wasn’t my decision alone to make.

Euthanasia is a difficult decision and Caymus had bounced back so many times that we had doubted ourselves.  A reader just sent me a link to this PDF that helps you know when it is time to euthanize your cat.

We were lucky enough to be able to get to do it at home.  Our new veterinarian was available that day to come to the house and put him down.  I sooo appreciated this gesture on her part as I didn’t want to drive him to the vet’s office.  He seemed very uncomfortable if I even picked him up, so a car ride would have been dreadful.  Likewise, driving your cat to it’s death isn’t fun – I have done that too.

I stayed with Caymus until the sedative that the veterinarian gave him was working – which was only minutes.  I said my final goodbyes to him and left the room.  I was unable to stay for his death.  I didn’t want to see him dead.  But my sister stayed, her husband and our father stayed for what-I-like-to-call the “death juice”.

And my sister told me it was very peaceful.  She watched as his belly stopped going up and down (stopped breathing).  The vet wrapped him up in my t-shirt which I had set next to him – they say that sense of smell is one of the last things to leave. So I wanted him to know I was there, in a way.  I still have not washed that t-shirt.

Caymus was a source of pure peace for me – I could hold him and my worries would melt away.  I know he was a soulmate cat of mine.  I miss him every single day.

I wish you all could have known him.  The veterinarians who met him in his final 6 months were so impressed by his easy going, do-anything-to me nature and came to love him too.

Happy 17th Birthday to Caymus in heaven.    Please come back to me.