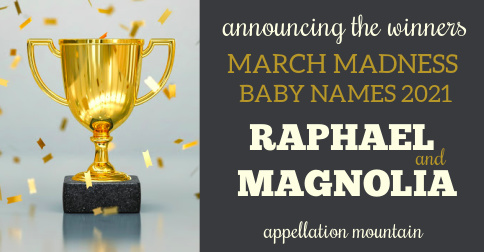 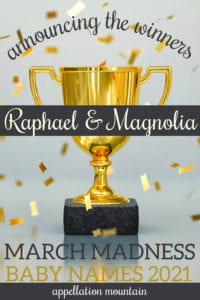 We’ve voted our way through the month of March, and now the results are in!

Before we get to the big announcement, let’s look at back at this year’s tournament.

We started with sixteen boy names and sixteen girl names:

If you’re curious, eight of those: Maisie, Noa, Faye, Marlowe, Zuzu, Persephone, Andromeda, and Vera also competed in the 2020 contest.

As for which names also appeared in 2020? That would be Cove, Torin, Reid, Arrow, Wilder, Deckard, Koa, and Hayes.

If that sounds like an eclectic list, it is! March Madness baby name contenders are drawn from the most popular posts during the prior calendar year. And that looks nothing like any other Top Ten list you’ve seen!

Voting narrowed each contest down to just two finalists: Maisie versus Magnolia, and Reid versus Raphael.

On the girls’ side, Magnolia defeated Maisie, with a little over 55% of the vote.

On the boys’ side, Raphael ended up with exactly 52% of the total. That means, for the second year in a row, Reid is the runner-up.

It’s another year featuring names that could belong to siblings. Raphael and Magnolia feel elaborate, but still rooted in history; memorable and distinctive, but still mainstream.

They are the eleventh set of names to earn the title, joining:

You’ll note that Cora appears twice. It’s not a typo! After back-to-back victories in 2014/2015, it was decided that past champions were retired from future years’ contests. So we’ll never seen Magnolia or Raphael in future years’ tournaments. (Runners-up, though, can continue to compete – until they win!)

Also noteworthy: Eliza and Theodore won an all-star round of March Madness baby names in summer 2020.

As always, this was a blast! I love seeing how the contests shake out – it’s always a delight and a surprise to see which names win it all.

What do you think of the March Madness baby names victors? Were these your favorites? Would you consider them for a daughter or a son? 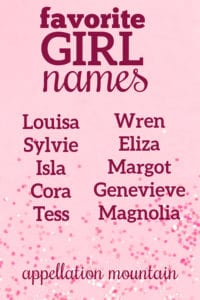 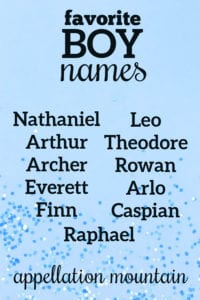