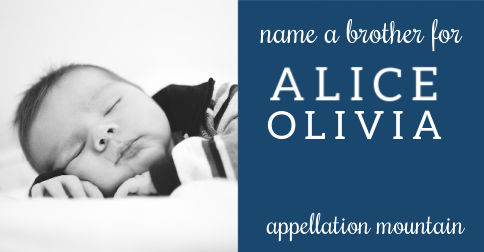 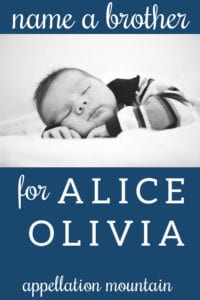 We have a daughter named Alice Olivia. Olivia was my favorite name forever, but I guess it was everybody else’s favorite name, too! My husband suggested Alice Olivia the same day we found out we were having a girl, and it just clicked.

Now our son is due in a few weeks, and neither of us has any really good ideas. We like Paul on paper, but not when we say it out loud. (And when I Google searched Alice and Paul, a suffragist named Alice Paul came up. Would that be weird?)

Theo was another name we talked about, but we know two. I wouldn’t say that popularity bothers me, but I feel weird about re-using a name. (My husband would probably use Theo anyway.) My nephew is Jack, so while I love, love, love that name, we can’t use it, either.

I guess I’d call our style traditional but not serious or stuffy, if that’s a style!

Our last name is short, but very Italian, so names like Luca and Marco sound like they’re extras from The Sopranos. And it ends with ‘i’ so names like Henry don’t sound right, either.

At this point, we just need some new ideas. Can you help?

Congratulations on your new son!

I love the idea of traditional, not stuffy. And I think I know what you mean.

Part of me wants to talk you into Paul. It’s impeccably classic, easy to say and spell, and relatively rare for boys born in this generation. And yet … as traditional and handsome as Paul is, it makes me think of Newman and McCartney. It doesn’t quite fit the same category as Theo and Jack. Of course, that’s the strength of Paul – it won’t repeat (much) in this generation.

Still, let’s come up with a fresh list and see if any of these can top Paul. I’m going to skip names like William and James, even though they have great, breezy nicknames and

Calvin can feel serious and philosophical, or sporty and confident. It’s a name with swagger, but also a name that you can take seriously. Few names offer that kind of range.

I’ve included a handful of surname names on this list. We tend to hear “traditional” and think Charles and John, but the simple fact is that we’ve been using surnames for our sons (and, to a lesser extent, daughters) for generations. Carter feels like a rock solid choice.

Alice and Everett sound just right together. Plus Everett is a little longer, and it balances out a shorter surname nicely.

Hayes might feel a little more modern than Everett or Carter, but I think it fits the same traditional-ish vibe. It’s high energy, but still the kind of name that can be taken seriously.

Just Nate fails to make the US Top 1000, but dozens of boys named Nathan and Nathaniel probably answer to Nate, at least some of the time. Still, it’s probably less common than Jack and stands on its own every bit as well as Cole or Jake.

When I hear Alice, it’s tempting to add “in Wonderland.” Peter, too, has an automatic storybook association. But both names can – and do – grow up. They’ve done it in generation after generation. It makes Peter a natural brother name for Alice.

Like Peter, Simon counts as a classic – but we tend to overlook it, somehow. Simon sounds smart and capable. Oh, and the dashing duke in Netflix series Bridgerton just happens to be named Simon, too.

Xavier offers plenty of history, but it’s only been really popular in the US since the 1990s. Still, it feels unexpected without being new or invented. And Alice and Xavier sound great together, too.

Overall, I feel like Calvin is the name that falls midway between Paul and Jack. Maybe that’s because of breezy nickname option Cal? Though I think lots of these work well, and I really do love Nate as a substitute for Jack.

Readers, what would you name a brother for Alice Olivia?