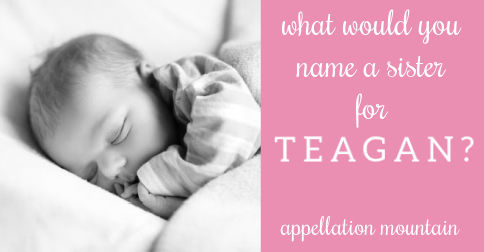 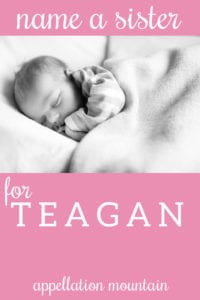 I am 30 weeks and in desperate need of help!

We have a daughter, Teagan. Her name is meaningful to us because it means “poet” and we are both English teachers. Her middle name is Jane. That was chosen after my grandmother, but I rather liked the combo of classic and new. Our last name is a four-syllable German name with lots of consonants. It starts and ends with R.

We like A LOT of girls names that end in “n” sounds. My husband is very hesitant to use one because the only boys name we agree on is Weston. So, having a Teagan (another “n”) and a Weston could be a little too matchy-matchy. There is no boy yet, but we plan on continuing to grow our family.

He also doesn’t like alliteration so R first names are out.

The only two names we agree on are Ellory and Lark. But neither quote feel right. Lark has a special meaning for us, but feels too harsh in combo with our last name and Ellory lends itself to very common nicknames like Ellie and Ella, and we prefer to avoid that as we grew up with very common names! I like Rory as a nickname for Ellory … but my husband is not sold.

Congratulations on your second daughter!

Teachers face very special challenges when naming children, right? You’ve heard so many names – and probably associate many of them with children.

Maybe that’s why I’m tempted to encourage you to embrace Lark. It might sound a little abrupt, but I think it works with your longer, strong surname. Is it perfect? Maybe not. But it’s not a clash or a mismatch, either. Plus there’s all that personal significance, and Teagan and Lark are great together.

That said, I think Ellory is all kinds of amazing, too. But here’s the thing about nicknames: you can often avoid them on your child’s behalf when they’re pre-verbal. But if your daughter calls herself Ella or Ellie? That’s something you’ll probably have to accept, even if it means she’s one in the crowd.

But something else jumps out at me: both Ellory and Lark fall into the “pretty rare” category. Neither ranks in the current US Top 1000. Teagan? It makes the current Top 200, and probably hovered around the Top 250 when you chose it. I wonder if part of the challenge is refining just how different a name you’re after.

A SISTER FOR TEAGAN

Before we go any farther, I wonder if Larkin would solve one of your problems. That extra syllable softens the name a little, by sidestepping that ‘k’ ending. But then you’re back in the two-names-ending-with-n pattern. I think you should consider this: maybe embracing the n endings is a better choice? After all, you like lots of names that fit in this category. I can think of two families who noticed this pattern after their third child – and had no trouble naming a fourth. And while I’m aware of the ‘n’ endings, it’s not quite like having kids named Jason, Jennifer, Joshua, and Jessica – shared endings are less obvious than all-J names.

Ellory makes me think of other three-syllable surnames ending with y that work for girls. Bellamy does, obviously, because of the strong Bell sound. And this name could shorten to Bella, which is the same challenge as Ellory/Ellie/Ella. But it still seems like less of an automatic nickname, so I wonder if it’s worth considering?

I think Delaney is an obvious sister name for Teagan. It shares the same surname style, but, like Teagan, is used far more heavily for girls. It’s appeared in the US Top 300 since 1996, but has never been wildly popular. Plus, the obvious nicknames are Laney and Lane – which are pretty uncommon, too, so you’ve avoided the super-popular nickname issue.

Of course, Laney, Lainey, Laine, and Lane could all be possible sister names for Teagan, too – though potentially with another ‘n’ ending.

Ember shares the same nature name vibe as Lark. But an -r ending with an R surname can be a little tricky. Embry feels like another possible unexpected surname option. And while Embry could shorten to Emmy, it’s also easily shorted to breezy Bree.

Ellory made me think of Ellis. But Hollis could be the better choice – tailored, not in the current Top 1000 but still familiar, and with a soft enough sound to harmonize with your surname.

Names ending in a vowel sound have potential, but I’m guessing Gemma and Serena aren’t your style. So how ’bout girl names ending in o? Meadow sounds like a sister for Teagan, and that ‘o’ ending is vibrant and distinctive, too. If not Meadow, I almost suggested Marlowe. While the repeating R sound could be an issue, I think it’s just enough shared sound to be appealing.

I know that R names should be off the list. But if you love Rory for Ellory, maybe Remy is a compromise? It’s a little less R intensive, but has the same unisex style.

As surname names go, Sinclair is much less common than, say, Harper or Madison. But I think it fits in nicely with lots of current names. Plus, it shortens to Clary which reminds me just a little of Rory.

Sleek and brief, Sloane is familiar and just on the right side of feminine – like Teagan.

Sound-wise, Vale is similar to Sloane. But since it’s a poetic word for a valley, it’s a little closer to Meadow and Lark, too.

Overall, my favorites for you are Delaney and Sloane – names that balance the different and the familiar, that share Teagan’s surname style, and that stand up nicely to your longer surname.

But I know there will some great suggestions from the community, so let’s see what the readers say!

What would you name a sister for Teagan?