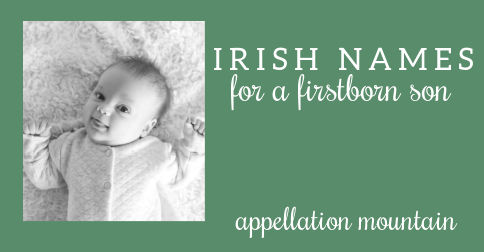 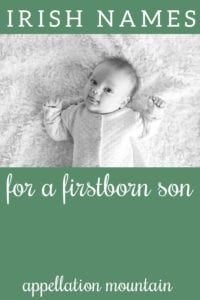 My husband comes from a big, Irish family. He has a one-syllable last name that rhymes with pin, and that will be our kids’ last name, too. All of his family names are Irish-Irish-Irish. There are something like four dozen other people with my husband’s same first-last name. (Not in his family, but so many come up on Facebook, LinkedIn, etc. and there was even another in his high school – no relation.)

We’re expecting our first baby, a boy, in May, and it’s really important to my husband that we find him an Irish name. I don’t mind … except that I feel like every Irish name is either a) taken by a brother/cousin/uncle or b) too obvious, especially with our common last name.

Because of close family members we’ve also ruled out Daniel, Charles, Peter, Kevin, Patrick, Aiden, Connor, Liam, James, Sean, Brendan, Declan, and Nolan. All the Finn- names are awful with our last name. (Which is too bad, because I really like Finley.)

Maybe I’m too focused on what we can’t use? Or maybe all the Irish names really are taken?

We’re using my last name, [email protected]@ric0, as a middle name for this baby – and any future kids, too. I’m not sure if we’ll stick with Irish names, because really – it’s so much harder than I thought it would be!

Can you help us come up with some Irish names for this baby?

Please read on for my reply and leave your thoughtful suggestions in the comments.

Congratulations on your first!

I think part of the challenge is this: you’re not actually considering Irish names, as much as you’re looking at Irish-American names. Sure, Saoirse Ronan has made her Irishy-Irish name almost wearable in the US. But mostly we’re not up for naming our kids Caolán or Oisín, right?

We’re looking for easily spelled and pronounced imports, the kind that your husband’s family has embraced for generations.

Happily, there are some appealing choices you haven’t mentioned. Most of them are a little less common for boys born today than, say, Nolan or Declan – but not all of them.

That might be a consideration because you mentioned future children. Choose a common (and Irish) name now, and you might feel like it defines your choices for the future. The opposite is also true. (Though emphasis on the you might feel part. In actual fact, there’s no rule that says siblings’ names must have similar popularity levels. My own kids’ names represent opposite extremes.)

A logical alternative to long-popular Connor, there’s a third century Irish king named Cormac. It probably means raven, or possibly wheel. But it’s fun name with lots of big, appealing sounds that would pair well with a shorter surname.

Brady is a long-time favorite, an Irish surname name with plenty of swagger thanks to the very successful quarterback. Swap the B for a G, and Grady is an equally Irish surname every bit as upbeat. Bonus? Grady has a great meaning: noble.

There’s nothing expressly Irish about lots of classic names. Except, well. Saint Patrick. Danny Boy. And, as it happens, Jack. Not only are there plenty of notable Irish Americans who answer to Jack – JFK, for one! – it’s topped the charts in Ireland and Northern Ireland in recent years. If names like Cormac feel a little too different, Jack hits the traditional-and-Irish mark exactly.

The Irish spell it Ciaran. (Well, Ciarán.) It means dark, and, like so many traditional Irish favorites, has a saint or two associated with the name.

It’s easy to forget that Oscar counts as Irish. After all, it’s steeped in American pop culture, from Sesame Street to the deli section of the grocery store. But it’s  nicely Irish, too – in legend, Oscar is the grandson of hero Finn McCool, and he follows in his footsteps.

We love names like Rowan and Roman. Ronan, too. It’s an Irish import that follows favorites like Aiden and Declan.

The name of an Irish ruler, Rory literally means “red king.” (One note: Hollywood legend Errol Flynn had a daughter named Rory. Which I mention for two reasons. First, it’s been used as unisex in the US since then – well, and especially post-Gilmore Girls. But also because of your surname. Still, she’s not a public figure, and this feels like an obscure point of trivia that you could comfortable forget. But she’s the first hit on a Google search.)

We tend to hear Tierney and Tiernan as a surnames, but they come from an Irish given name. (There’s a sixth century saint Tighearnach or Tigernach, and a few other historical figures, too.) Neither is common in the US, and both are potentially unisex. Tierney is used in higher numbers for girls and Tiernan for boys, though they both feel as flexible as, say, Rowan or Riley.

Overall, I think I’m drawn to names with more distinctive sounds to go with your short surname: Kieran, Cormac, Ronan. But when I factor in the middle name, I think Jack could be terribly appealing, too.

Readers, over to you! Can you suggest some more Irish boy names that I’ve overlooked?