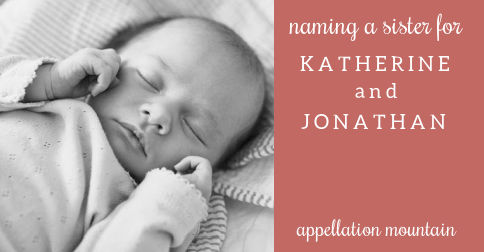 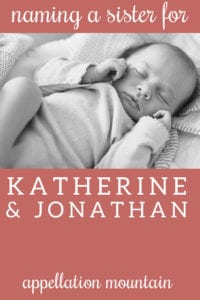 We’re expecting our third child, a girl, in early 2021, and we’re struggling to find a name.

Here’s our dilemma: our last name is very short. One syllable. Rhymes with dry and why. It’s a kind of bread.

Growing up my husband was always AdamLastName. Since taking my husband’s last name, I’ve experienced the same thing. It’s like our last name is becoming part of the name everyone uses.

So we gave our kids longer first names and don’t shorten them. Katherine is Katie at home, but always Katherine in public. Same with Jonathan/Jon-Jon. We like the shorter nicknames, and short names in general, but don’t want them to get swallowed up with our last name.

If this baby had been a boy, we settled on Cameron. It would’ve been Jonathan’s name except is Cameron with our last name like a sandwich? Maybe, but we’re over it now. We also worried it was too close to Katherine, but with Jonathan in the mix, maybe that isn’t an issue.

But for a sister? There are so many choices, and we’re not sure if any of them are right.

We like Charlotte and Isabelle, but they seem too popular.

As a girl-Jamie, I also don’t want to end up with a girl-Charlie or a girl-Alex. I hated it in high school, and it can still be annoying sometimes.

I don’t want to use another J name and there’s the girl-Jo issue, so Josephine is out, but that’s kind of what we’re looking for.

What name aren’t we thinking of?!

Congratulations on your new daughter!

Parents who prefer classic names have it easier, in the sense that their list is automatically made for them. Except that highly edited list of truly traditional choices can conflict with other wants. Because the right name for your daughter should also be clearly feminine (and unlikely to be reduced to a masculine nickname), at least two syllables and possibly three (and unlikely to be automatically shortened), can’t start with J, and maybe shouldn’t be too popular, either.

I’m going to suggest that you might want to overlook the popularity issue.

The numbers as of 2019 are far lower – less than 10 out of every 100 boys or girls receive a Top Ten name. And even the most popular names – Liam and Noah, Olivia and Emma – aren’t nearly as commonly used.

Now, if you’re ruling out Isabelle and Charlotte because they’re the names of your neighbors’ daughters, or your best friend from college? That’s one thing. And if you personally feel like the names just don’t appeal to you, in part because they’re so familiar? That’s fine, too.

But if you’re only ruling out popular names because you feel like you should?

All of that said, let’s see if we can find some traditional girl names that feel like they could be comfortably used sans nickname – and aren’t in the current Top 25.

If Cam is a favorite for a boy, would Camille appeal for a daughter? Camila ranks #15, but Camille sounds just a little different, and is less common – but every bit as familiar.

Charlotte is, of course, a feminine form of Charles, sharing the Charlie nickname. Caroline is also related, but I’ve yet to meet a Caroline called Charlie. (Though I’m sure there’s one out there.) And while plenty of Caroline became Carries back in the day, today they tend to use their names in full.

Princess Di and Wonder Woman come to mind, but of course Diana started out as a Roman goddess, associated with the moon and the hunt. It’s a feminine, romantic name but one with plenty of strength, too.

A traditional French favorite, Genevieve can easily be shortened, but often is not. And Katherine and Genevieve sound very much like sisters.

On paper, Eleanor might be slightly more popular than you like. But, unlike the evergreen Elizabeth, I tend to hear Eleanor used in full – even for children. (Though this varies, and Ellie is an obvious nickname option.)

Margaret does tend to be nicknamed – though I can think of at least one who always answers to Margaret in full. But Margot – originally a diminutive – has long since graduated to independent name status.

Always a middle name, never a first. Or rarely a first. Marie is refreshing as a given name – instantly recognized, easy to say and spell, but so much rarer than we’d ever guess.

Maybe Naomi isn’t a classic in the Elizabeth-Katherine class, but it is a Biblical girl’s name used across the millennia. I feels like a great fit with Jonathan and Katherine.

Rose names range from the familiar to the rare. I think Rosalie hits the middle ground exactly.

There’s another way to think about Katherine. Yes, it’s classic. But it’s also tailored and strong. Vivian might be less of a long-standing traditional, but it has history of its own. And it does feel like it stands up to all the strength of sister Katherine’s name.

My favorite for you is probably Eleanor. It feels like the obvious choice! And yet, I’m tempted by every name on this list, from the slightly surprising Naomi to the why-don’t-we-hear-it-more-Marie.

Readers, help us out! What would you name a sister for Katherine and Jonathan – nickname-proof and traditional, please!