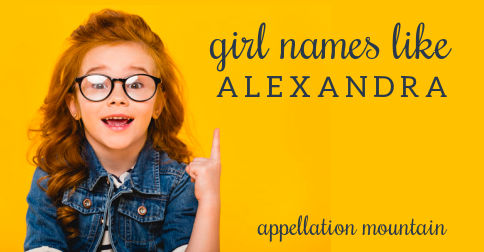 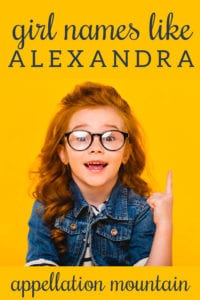 Names like Alexandra command all the sounds and syllables. They’re regal. Maybe even a bit grand. But they’re nickname-rich and versatile, too. Alexandra can be Alex or Ali or Sasha, names to suit any style.

So why not just use Alexandra? Maybe you already have, and this name is for her sister. Or maybe you’re after something a little less popular. While Alexandra ranks a not-too-popular #130 as of 2019, it spent thirty solid years in the Top 100 – from 1984 through 2015.

Names like Alexandra have to be long. They need history. A high-value Scrabble letter helps, too. So does a boyish nickname.

If you’re seeking Alexandra substitutes, these bold and dramatic classics might be just what you’re after.

Another A name for a daughter, Anastasia shares Alexandra’s long and elaborate sound. It’s equally nickname-rich, and comes with an appealing meaning: resurrection.

Antonia is the feminine form of Anthony; Antonella is an Italian form that turns the syllable count up even higher. It also adds some appealing nickname options, like Ella and Nell.

We adore Top Ten Charlotte, and classic Caroline remains a Top Ten staple. But how about Carlotta, an Italian elaboration of Carla? It has all the dramatic sounds and syllables of Alexandra, but is far more rare.

The name of the loyal daughter in King Lear, Cordelia feels lacy and elaborate. But it’s a name with quite a bit of strength, too. That makes it a match for commanding Alexandra.

Part of what draws us to Alexandra must be the letter X factor. Genevieve, likewise, benefits from the sharp V sound. Feminine and strong, it’s a worthy alternative.

Isabella fits, of course, but it’s far more popular than Alexandra. Isadora – as in the legendary dancer Duncan – could be an intriguing substitute.

Julia is every bit as ancient, but with plenty of modern appeal. Lengthening it to Juliana – or maybe Juliette? – nudges it even closer to the dramatic sound of Alexandra.

As ancient as Julia and Alexandra, too, Octavia has it all – the history, the sound, the high value Scrabble letter.

An elaborate Rose name, Rosalind feels old-fashioned and strong. It’s the kind of name you expect to hear in a history book. And yet, with so many girls answering to Rosie, it fits in with current naming styles every bit as well.

Fiery Seraphina shares the many syllables of Alexandra. And while this name is rare, the rhythm and spirit makes Seraphina a perfect substitute.

Theodora might be the most perfect update to Alexandra. It’s a feminine take on an evergreen male classic. It offers nicknames galore. And the name feels both accessible and grand at once.

We often leave Veronica off lists of classic girl names, and yet – it boasts centuries of use, many notable bearers, and an intriguing story. Combined with the letter V, all of it makes Veronica a worthy substitute for Alexandra.

Names like Alexandra often match on style or sound, and that’s true for Victoria, too. But Victoria manages to out-regal Alexandra – a tall order! But given the long and widely influential reign of Queen Victoria, it’s a name that feels at home in a crown.

A rare Z name, Zoraida means dawn in Arabic. Cervantes gave the name to a Don Quixote character. It’s syllable-rich and dramatic in sound, sharing many qualities with evergreen Alexandra.

What would you suggest for parents seeking names like Alexandra?

First published on January 29, 2008, this post was revised substantially and republished on December 29, 2020.