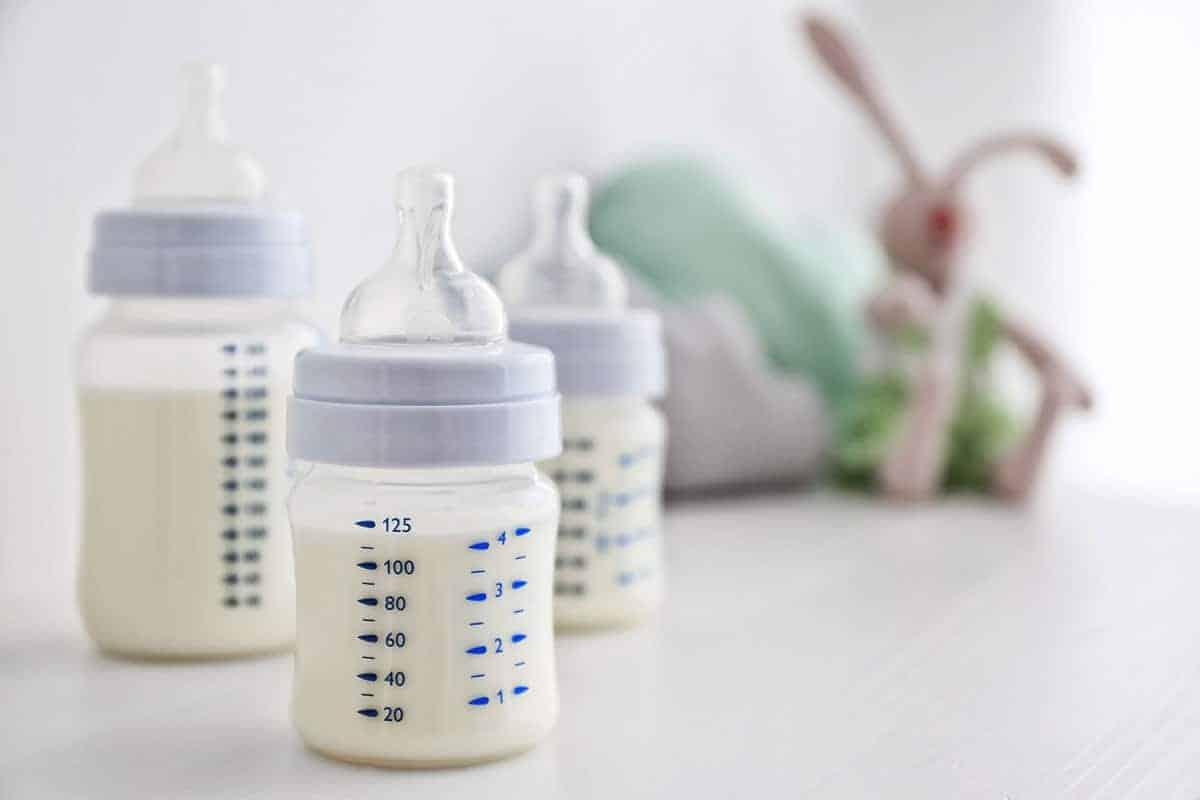 Stopping night feedings can be an important milestone for your baby or toddler—and mean better shuteye for them and you. We’ve got all the info you need to consider when night wearning, plus strategies on how to do it successfully with minimal tears.

When your baby is a newborn, you’re used to them waking up several times a night to nurse or take a bottle. But, as they grow, their nutritional needs change and it’s okay to cut back and/or eliminate feeds throughout the night.

However, by this point, most babies are used to waking up several times a night and eating, so getting them to a place where they’ll go at least 7 to 8 hours without one can be a bit of a process. The good news? Alicia Birdsong, a certified pediatric sleep consultant and founder of Hush Little Birdie Pediatric Sleep Consulting is here to walk you through how to do it.

TIP: We’re going to share tips on night weaning both babies and toddlers since there’s no one right age to do this.

“So first thing when it comes to night weaning, I think it’s important to talk about when it’s nutritionally appropriate to night wean,” says Birdsong. This is something you should talk to your pediatrician about, but typically babies between the ages of six and eight months are ready to go through the night without eating.

“It’s sometimes a little younger, or a little older,” adds Birdsong, “but this seems to be the average age to night wean.” One of the biggest indicators you can look for is a child doubling his or her birth weight, which tends to correlate with not needing to eat at night. Other clues that it might be time to wean are if your baby is having trouble getting back to sleep after feeds, or is waking at other times of night when it’s not time to eat.

The thing with night weaning is that it’s often not just about eating, it’s about the fact that your baby is used to either nursing or having a bottle to fall asleep initially and get himself back to sleep throughout the night. If you’re not ready to teach your child to fall asleep on their own, explains Birdsong, you can switch eating with another sleep association like rocking to sleep.

There are many methods for helping kids fall asleep on their own—you can checkout Birdsong’s Instagram for more advice-—but the part that is related to weaning is really making sure that your child is not dozing off while eating. This might mean moving nursing or the bottle feed to the beginning of the bedtime routine—with the lights on!—and then doing a book or a song or something after that before putting your child in the crib.

(If you nurse, you might even want to have your partner take over that second half of bedtime so that your child is not expecting you to feed him to sleep.)

How to Cut Back on Feedings

It’s important that you get the bedtime routine on track, because however your child is falling asleep at bedtime will also be how they’re expecting to get back to sleep during the night. But, beyond that, you obviously have to deal with the actual issue of feedings. Once you’ve established that your child is ready to night wean, you may choose to go cold turkey and remove the feeds altogether.

“If you would like to do something more gradual, though, you can still offer a night feed but slowly adjust how long the feed lasts,” says Birdsong. So, for example, if you typically nurse for 6 minutes, you can cut that down by a minute every few days until the feedings taper off. (Same works for bottle feeding, just cut down the amount of formula you offer.)

If you’re also working on your child’s independent sleep routine, once you remove that night feeding anytime they wake up, you should handle it with whatever method you’ve decided to use at the start of bedtime.

“The more consistent you are, the easier it’s going to be for them to learn a different way of doing things,” urges Birdsong.

A Note on Co-Sleeping

Co-sleeping can pose extra challenges when night weaning. “It may be really hard if you’re right there, and your baby is used to nursing and you’re telling him or her no…especially in the middle of the night when they’re tired,” explains Birdsong. The solution? You might need to head to the guest room for a few evenings and let your child and your partner sleep together without you.

“If you’re not physically not present for, let’s say the first 4 to 5 nights, then the thought of nursing won’t be nearly as prevalent and your partner can offer other forms of comfort.” Depending on your child’s age, this could include snuggles, a stuffed animal, or even a pacifier.

How long does it take to night wean?

It depends. Once your child is ready to drop their night feeds, you can choose to go cold turkey and stop nursing or giving bottles during sleeping hours altogether. (If you’re nursing, though, you may need to wake up to pump for a few days while your body adjusts.) However, many parents choose to cut down the number of feeds and amount of milk or formula offered gradually, which can take a few weeks.

When can you stop night feedings?

Nutritionally speaking, most babies can do without night feedings between 6 and 8 months of age or once they’ve doubled their birth weight. But it’s important to ask your pediatrician for the go-ahead before eliminating these nursing sessions or bottles.

How do I stop nursing to sleep?

You’ll need to get your baby out of the habit of falling asleep while nursing, and this may mean adjusting your bedtime routine. One easy way to do this is to simply move nursing to the beginning of the routine. This may mean nursing first, with the lights on, and then getting them into their sleep sack and reading a book or singing a song after that, for example. Another trick: Have your partner take over the rest of bedtime after nursing, to help further separate the act of nursing from falling asleep.

How to Night Wean a Toddler

Once kids are over 12 months, it can be harder to wean them at night simply because they’ve been in the habit of waking for a longer period of time. It can be fairly frustrating to cut down on feeds slowly for this age, as Amy found when she night weaned her third kiddo at 14 months. The same advice as above applies, though the kids may have more feelings about it.

“After three nights of trying to gradually reduce the duration of our feeds, I knew it was not working. My let down would barely be over and the timer was up and the baby was confused about why I was only giving him a little milk,” she explains. “I worked with Alicia to develop a plan to cut the night feedings cold turkey and after two nights, he was sleeping through the night.” Yes, that may mean crying temporarily, but Amy found that the clear rules were much easier for everyone to understand.

The goal of night weaning—once the child is nutritionally able to go through the night without breastmilk or formula—is to break the habit of waking up during the night. That can take 2 nights or a week, and it may have the benefit of making the kids be hungrier for milk or food during the day. It’s a process, so be gentle with yourself through the transition.

Find our full guide to Weaning Toddlers here. And reach out to Alicia for additional personalized support. You can take $20 off a package with the code yummytoddlerfood.

The cutest tableware and home accessories by Rosanna Inc. renowned for high quality and innovative design. Use as a trinket