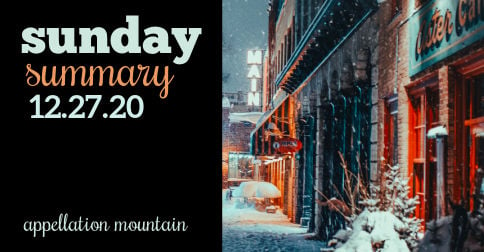 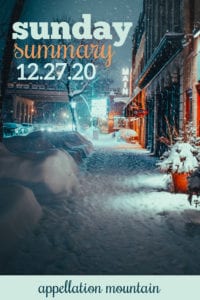 As this wild and challenging year draws to a close, I wanted to take a minute and just say: I’m incredibly grateful for you, each and every single one.

I had a longer – and I think, very eloquent – version of this written on Christmas night. But somewhere between then and now, technology happened. And now it’s gone, swept away with a sea of cookie sprinkles and discarded ribbon.

That’s okay, though, because the only thing I wanted to say was that it’s truly a joy to be here with you. To celebrate as you grow your families. To think deeply about stories that involve names, yes, but also so much more. (Race, gender, fame, identity … and to think, I once imagined that others wouldn’t take me seriously if I spent all of my time thinking about something as simple as names.)

So as this old year recedes, and a hopeful new one begins, thank you, with deepest gratitude, for being here with me. I remain astonished and delighted that so many of you feel as strongly about names as I do, and I’m humbled that you’re willing to share your thoughts with me and the community here!

Are you watching Bridgerton? It’s the new Shonda Rhimes production for Netflix, based on the novels of Julia Quinn. It’s sort of Gossip Girl meets Jane Austen, with a healthy dose of anachronism. (Like the cover of Maroon 5’s “Girls Like You,” performed by the orchestra during a ball.) Anyway, the Bridgerton family includes eight siblings, all named in alphabetical order: Anthony, Benedict, Colin, Daphne, Eloise, Francesca, Gregory, and Hyacinth. As a bonus, there’s the Featherington family, including mom Portia, and sisters Penelope, Philippa, and Prudence. (I fully expect to confuse the latter with the Haliwells and refer to one of them as Phoebe at some point.)

Finnish names intrigue me, but none more than Aino. Nancy reports on the new Finnish Top Ten, but also on the backstory of the most popular name for girls in 2019. It reminds me quite a bit of a wave-making name from just a few weeks ago: Enola. Both names suggest solitude. But perhaps parents today read that as independence, rather than loneliness.

This sounds like an incredibly challenging situation. They named their son after his father. But … his parents are divorced, and now his mom can’t bear to use the name, calling her grandson by nicknames instead. The new mom is irked – and I get it – insisting they got the grandmother’s blessing in advance. But … I can’t help but think that there’s a big difference between being asked about it in theory, and living with it in practice.

Legitimate Baby Names does such an amazing job of covering names from everywhere. Omolola caught my eye recently. If you’re interested in international choices – especially those from beyond Europe and the English-speaking world – it’s a great resource.

Let’s end with a powerful look back at 2020 through name news from Laura Wattenberg. Because when we talk about names, we talk about everything. That’s more true this year than ever.

That’s all for this week. As always, thank you for reading – and thinking of you!

Can’t get enough name talk? Sign up for my weekly newsletter, sent every Tuesday: 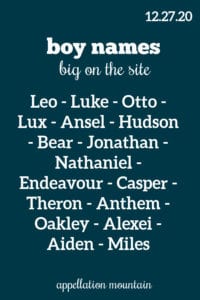