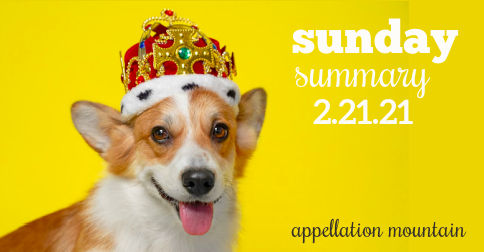 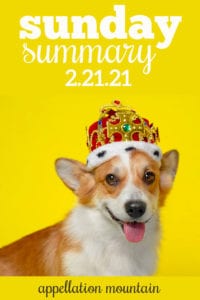 It’s very much a family name. Philip honors Eugenie’s grandfather, Prince Philip, husband of Queen Elizabeth II. While Hawke might make you wonder if the Brooksbanks binged Cobra Kai during lockdown, it’s actually a name from Jack’s family tree. August, too, has history among the British royal family.

But for all that August Philip Hawke centers their son in the past, it’s a thoroughly modern favorite, too. August ranked #167 in the US as of 2019. It’s far less common in the UK, but certainly not unknown. August is an ancient name at home in the modern world, and quite stylish, too.

Back in the day, there were rumors that some felt the name Diana wasn’t an appropriately regal choice for a future queen. (Though she’s named after a Spencer relative.) You’ve probably heard that the Queen vetoed Annabel, the original name the Duke and Duchess of York, Andrew and Sarah, considered for Beatrice, Eugenie’s sister.

Of course, Beatrice was the queen’s granddaughter, a princess by birth. It’s fair to say that August will never be anywhere near that close to the throne.

But, in general, I think we’ve all steadily, gradually expanded our ideas about what makes an acceptable name. “Traditional” is applied to all sorts of choices – Top 100 picks that weren’t in use before the 1950s, old school names recently rediscovered, literary names that have never really caught on.

That’s a good thing. After all, Queen Elizabeth II has grandchildren and great-children with rock solid classic names like Charlotte and Louise, Peter and George. But there’s also Isla and Archie, Mia and now August. It’s not a wild bunch – there’s no Xanthippe or Zio among them – but it’s also not a staid and predictable set of names.

We have more freedom to name our kiddos than ever before, no matter how grand your grandmother might be. And that’s a good thing.

Looking for more like this? Sign up for the weekly newsletter, sent on Tuesdays. And scroll down for more name news + this week’s trending names.

Speaking of things that are changing? Namerology’s look at how the gender gap in naming is closing is fascinating. And it’s not the names we choose for our daughters that are changing. Nope. It’s names like Sebastian and Elijah for our sons that are driving much of the transformation.

Every time I read the birth announcements at British Baby Names, I’m convinced that two middles is going to be standard in another twenty years. I mean … Juno Zennor Boudicca, Angus Edward Tennyson? The first and second are good, but that bonus middle is irresistible.

Confession: I’m not well-versed in Lord of the Rings. I feel like I should be. I mean … THE NAMES. Which is why I enjoy lists like this one. Though maybe I just need to sit down and start reading.

Other things I’m not well-versed in: the American South. I have a very Southern friend, and for all that we’re (usually) in sync, things do get lost in translation. Like double names. But I’m charmed by the tradition, and was interested to read this account of double names in action.

I don’t read a word of Portuguese, but I still love the name lists at Nomes & Mais Nomes. Like this one of girl names starting with A. Equally fascinating: Google Translate automatically changes Alma to Soul + Aurea to Golden.

That’s all for this week! As always, thank you for reading. Thinking of you! 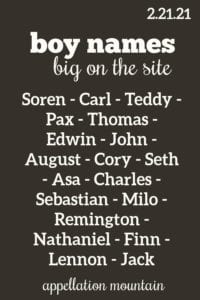 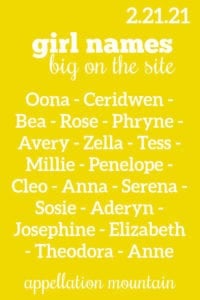