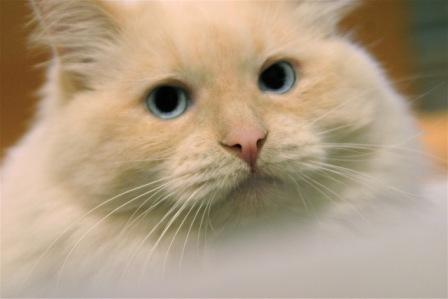 With traditional Ragdoll cats, there are eight main colors recognized in the official breed, six of which are point colors. These are split between primaries, which are more dominant in the genes, and dilutes. Cream is a dilute of the red color, which means that breeders that want a litter of cream point Ragdoll kittens need to be more selective in which cats they use.

The term ‘point’ refers to the extremities of the cat. A cream point Ragdoll will have a face, ears, feet and tail that are all a shade of ivory or cream. A Ragdoll cat’s eye color will always be blue, while with a cream point Ragdoll the paw pads and nose leather will be somewhere between a flesh color and a rosy pink, depending on the pattern.

A Ragdoll kitten will always be born white, with the color starting to develop after around 10 weeks, and sometimes not being fully developed until the cat is four years old. Cream point Ragdolls keep the white coat, with the color developing in the points.

For a cat to be seen as a purebred, it should have a clear white color across the body, although subtle shading is permissible by the CFA standards. While a Ragdoll coat will darken as the cat ages, there should still be a clear definition between the body and the points.

In terms of pattern, a cream point Ragdoll can present as a Colorpoint, a Bicolor or a Mitted cat.

The Colorpoint pattern will be where the Ragdoll coat is a little lighter than the points, but without any white spots. A locket on the chest would also disqualify the cat from being classified as a purebred Ragdoll.

For the Bicolor you should expect to see a white inverted V mask on the face, which should ideally be symmetrical and shouldn’t extend beyond the outer edge of the cat’s eyes. Any dark spotting in the V will mean that purebred cat status can’t be recognized.